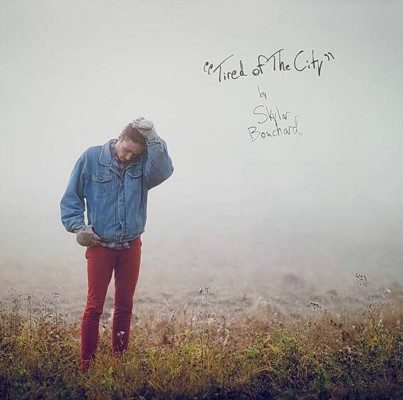 I was pleased to have the chance to listen to Skylar Bouchard‘s newest EP, Tired Of The City. The release touches many aspects of his life, especially the fact that he desperately wanted to leave his hometown of Winnipeg but later on down the dirt road of life he began admiring it and started to love it once that transition and change happened.

Skylar Bouchard’s first track comes in strong called “Tired Of The City” and it has such an intense sound to it that just makes you sit down and chill out for the time being. Actually, I sat through the whole EP and got in trouble by my employer, but it was worth it. The instrumentals and vocals have such a perfect Canadian Folk sound with a little bit of all our well-known folk singers all into one. This song was certainly a great intro to this release.

His second song “Sore Hands” is a great song that deals with a 33-year-old family member that looked exactly like Skylar Bouchard as he does now at his age. The guitar playing and harmonica is on point on this track.

The third song on the roster is called “Montreal” or as I call it Mount Royallllll and a beauty of a city it is!! Cobblestone antique streets and nice downtown shopping. Always a fun time in Montreal and Bouchard adds that Montreal sounds to this track, with his lyrics letting you know about his state of mind and in between love and relationships that he is standing on and not knowing much about much. This song is just put together wonderfully. All skills on point on this track as far as instrumental goes. Everything sounds so harmonized and this whole EP is nothing short of amazing. This song reminded me of a young Bob Dylan.

From “Me To You” is a great song where Bouchard allows his voice to change levels and shows his true potential on this one. From writing to his unborn son to realizing his knowledge should not be taken away. Skylar speaks of many forms of love and talks about the beatings of the heart to a fresh start and “no one’s gonna take that away”.

“Cherry Tree” is a song about a girl who was overprotected by her father and if you came upon his property you would get the brunt part of the shotgun. “And all she ever wanted was a song” from a lover for her own.