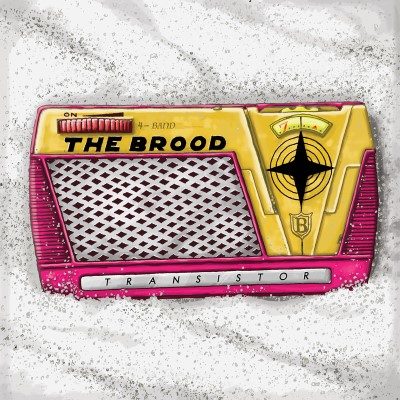 East Coast pop-meets-art meets-rock band The Brood have released their most recent release, Transistor, a quirky eleven track album that feels like a flashback to the synth-based rock of the 1980’s.

The album opens with “Chicken Cheese Beer”, a track that feels like a college student’s big weekend out over a series of start and stop rhythms, crunching guitars, and overdriven synths.  The album continues in a similar direction of the first song, emphasising synthesizer-driven pop rock with a unique rhythmic flair.  The best of this is represented by “Munchies”, a song that makes use of ambient textures and spacious rhythms to create a vibe of what I’d image to be ever present at an 80’s new wave club.  One of the strongest things about Transistor is The Brood’s ability to create such a distinct vibe throughout their record.

While Transistor is a solid collection of songs, to call the record art pop is wrong.  When I think of art rock, the first thing that comes to mind is David Bowie’s Berlin Trilogy, and Transistor feels far too safe of a record to be considered among the art rock genre.  There are very few risks nor does the album feel very experimental.  In many ways, despite their strong connection to 1980’s pop rock, The Brood fit seamlessly with today’s vast indie rock scene largely due to their use of traditional pop structures as well as their tendency to blend guitars with synths.

All in all, Transistor is a solid addition to The Brood’s career.  As their third album, Transistor cements themselves as not only an important figure amongst the growing indie rock scene, but also as one of the few groups who have seamlessly brought the 1980’s new wave scene into modern relevance in a manner that uniquely blends current and past trends just as they mix pop and rock elements together.