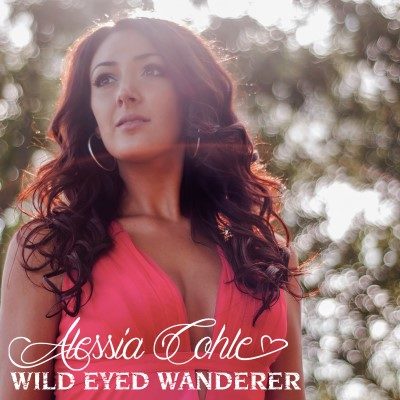 Alessia Cohle has released her brand new EP, Wild Eyed Wanderer. The six-song EP was produced by Douglas Romanow (Justin Bieber, Johnny Reid) and inspires listeners “to take a leap of faith.” Cohle released the single “Sunday Shoes” in 2015, which lead to her recording and releasing her full length 2016 album, Talk To Me. Two singles were released to radio from the album; “How Bad” and the title track “Talk To Me.”

Since the release of Talk To Me, Cohle has been hard at work cultivating both her fan base and her new music. Performing during the Canadian Country Music Week in 2016 and 2017 where she shared the stage with artists like Aaron Pritchett and Meghan Patrick, opening up for Brett Kissel on his 2017 Ice, Snow & 30 Below Tour, and embarking on promotional tours supporting her music has allowed Cohle to reach a wider and bigger audience.

“Love Gone Right” is the opening track for the EP. Cohle breaks the ice and introduces you to her sweet vocals and country style with the first tune. “Wanderlust” is an upbeat and stellar showcase of Cohle’s talent and musical passion. “Wanderlust” encourages you to “embrace the great unknown.” Cohle consistently performs throughout the EP. I enjoyed the tongue-in-cheek storytelling of “Always A Bridesmaid” and the lyrics of “Wild.”

“While writing this collection of songs what was foremost in my mind was ensuring the lyrics and the music emulate my truth and express who I am as an artist. I’m so excited for this EP because the music on it really captures my rock and soul music influences, which are definitely what I want to convey and share with listeners this time around.” Cohle shares about Wild Eyed Wanderer.

With a message of travel and freedom, Wild Eyed Wanderer inspires the listener to dream big and explore life. Cohle is currently scheduled to take part in the VIA Rail Artist On-Board program. VIA Rail offers complimentary fare for professional artists and musicians in return for performing on board their Toronto-Vancouver and Toronto-Halifax routes. Wild Eyed Wanderer is the perfect theme for Cohle and her latest musical adventure.