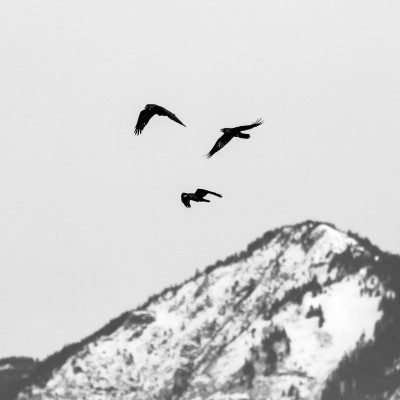 Vancouver based indie folk band Clay Ravens yearns for authenticity in their debut EP, All In. The group began as a duo of singer-songwriter siblings Justin and Brianne Huntley Smith who later incorporated a well-versed band to form their self-described “intentional juxtaposition”. Bright folk instruments and foot stomping rhythms are deceivingly paired with lyrics that explore the hardships of displacement and addiction.

Clay Ravens grasp the ruggedness of this genre without compromising production quality or technical competence. Matt Cook-Contois’s fiddle playing is superb, his expressive lines blend the flowing vocal harmonies with powerhouse instruments throughout All In. On solo track “One by One”, his virtuosity creates a passionate, energetic interlude that drives the album forward.

The primary shortcoming of this EP stems from the juxtaposition they’re desperately trying to sell. It’s conceptually interesting, but nevertheless, a distracting contradiction. The opener, “Grown Ass Man”, features the striking, poignant lyrics “Tie that noose around my neck/just get on with it”. Seconds later, it transitions into a lively, lighthearted chorus. We’re left questioning their genuinity in most of the songs that follow.

“Draft Dodger” is easily the most believable track on the EP and indicates the band’s potential. Justin Huntley Smith is immediately captivating, his warm, grounding tone sings over a simple guitar progression that weaves in and out. His melancholic reflections resonate deeper every time he is left unaccompanied. The fiddle entries are sparse and ever-so-slightly delayed, like a nostalgic afterthought. The track ends with both vocalists repeating the line “I miss my home” countless times, the spirit of these words is then echoed by the rest of the band. Here, we arrive at the sincerity that’s lacking in most of the album.

In their pursuit of the beautiful struggle, Clay Ravens sometimes neglect the gray between the lines. Moving forward, they need to make clear what exactly they’re trying to capture in order to define who they are. Fortunately, all the musical elements are already in place.