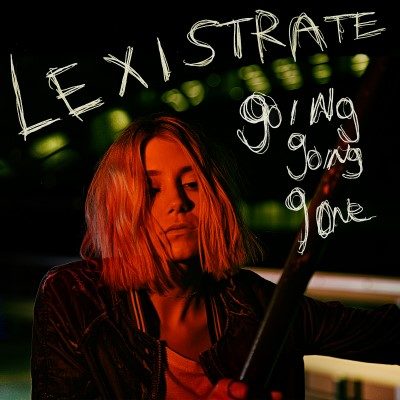 Tomorrow marks the release of Lexi Strate‘s new single, “Going Going Gone”, but here at Canadian Beats, we are happy to offer you an exclusive first look and listen. We asked Lexi about the song and video, she responded,

“Going Going Gone” started with a hook line one of my producers (Dan Davidson) had. It started as a slower-tempo ballad type song, but once my other producer (Ari Rhodes) got a hold of it he completely gave it a new, cool sound. We ended up keeping that “Going Going Gone” lead chorus with the sped up vocal in there because we thought it really set the production apart. The song is about a relationship that stuck – it’s that point where it has to go one way or the other, and the decision that needs to be made when someone isn’t willing to fight to make things better.

We decided to do a bit of an 80’s theme by using an old Betamax cam which gives the video a cool nostalgic feel. In the video, I’m moving on from my boy troubles by spending the day/night out with my girls having fun and being a little rebellious! I’m so happy with how it turned out – I think it really goes well with the song and brings out my personality.”

Care to introduce yourself to our listeners?

Sure! Well, as you know, my name is Lexi Strate (actually my real name). I’m from the Calgary area and have been performing professionally for 5 years. I suppose a couple interesting career points about me might be that I’ve been lucky enough to have won Edmonton’s Virgin Radio Star, had tunes in the top 40, a couple million Spotify spins, TV placements for my music, I won a WCMA last year, and of course, I have been mentioned on one of my favourite blogs Canadian Beats! Ummm – what else can I tell you… I’ve sang the national anthems for both the NHL and NBA which is a dream come true since I’m a huge fan of both sports. I have a dog named Guapo, I love bread but medically can’t eat it, I golf, and I co-host a podcast called ‘Sorta Pop Culture’ because I must confess… I’m a reality TV junky!

I only started songwriting a few years ago. To be honest, it just never was my thing and I’m still getting comfortable with it and trying to gain some confidence. That’s what’s so great about co-writing – I’ve been very lucky to get to write with some of Canada’s best songwriters which has been an amazing learning experience and has led me to discover a new electro-pop sound that I’m so very excited about! I felt like I really found my groove with my previous single “Diamond Eyes”. Spotify really showed me the love and added the single to several playlists that introduced me to a whole new group of fans! I’m excited to share this new single, ‘Going Going Gone’ with more of the underground music listeners! If I had to compare my new music to another artists’ I’d say, Halsey and Tove Lo.

I don’t have any big upcoming shows booked at the moment I can talk about, but that’s something that we’ll be working on with the release of this new single, so keep an eye on my website for show updates. My live show is a good mix of fun, energetic, full band originals where I get to dance around the stage a bit, as well as one or two acoustic tunes, just me and my guitar, and I’ll usually throw in one of my favourite cover songs.

I would suggest for new listeners to check out this newest release, ‘Going Going Gone’ because it’s new and exciting!! I also feel that it best conveys who I want to be as an artist. My team and I have been experimenting a lot in the last few years and we are now really honing in on this new sound. I would also suggest watching the music video for GGG as well – it really compliments the song and fits my personality and vibe well.

I can’t get enough of Canadian music! It makes up at least half of what I listen to these days. My favourite Canadian artist right now is Jessie Reyes – I’ve never heard a voice like hers before and she is so badass and so real. The Arkells are constantly releasing catchy tunes. I’ll forever be listening to the iconic songs of my favourite band growing up – The Tragically Hip. I must add that I’m so honoured to celebrate my single release tomorrow on the same day as Gord Downie’s solo album release.