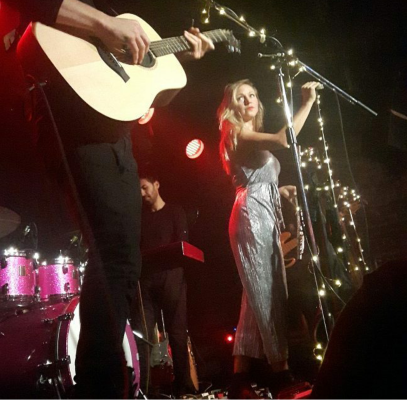 On Saturday, October 21st, islanders braved Victoria’s driving rain to the sold-out Hey Ocean! show at Lucky Bar. One stop on a tour of intimate club shows to celebrate their recently-completed fourth LP, the Canadian indie favourites delivered after their three-year hiatus, and fans let it show.

An energetic, tropical twist on west coast pop, Hey Ocean! packed out Lucky Bar like never before— despite the miserable weather, there was nothing but oomph and adoration from the crowd, fans and new listeners of all ages flocking to get a sunny break from the bleak October night outside. Acting as both the opening and main acts, Hey Ocean! twirled between samples from the main trio’s—David Beckingham, Ashleigh Ball, and David Vertesi’s—solo albums, tried-and-true fan favourites, and, most brilliantly, an exclusive sneak-peak into their new LP.

Dynamic, flashy, and overflowing with talent and charismatic stage presence, Hey Ocean! delivered, and it was a show Victoria won’t soon forget.

Share this:
Related ItemsCanadianFreshley Pressed PRHey OceanIndieLucky BarVictoria BC
← Previous Story IN PHOTOS – Emilie-Claire Barlow in Guelph ON
Next Story → Bringing CHEO into the spotlight in Ottawa