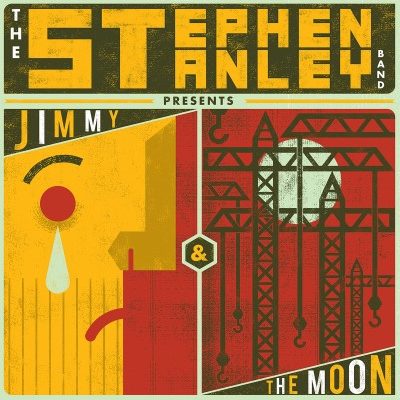 Roots-rock-pop singer-songwriter, Stephen Stanley may be a name you recognize as he was formerly in the well-known band, Lowest of the Low. Now, he returns as The Stephen Stanley Band with a new album, Jimmy & the Moon. The release date for the album is November 24, 2017, but our readers are lucky, as we have an exclusive stream of the album for you all to hear. Check it out below, as well as our newest segment of Five Questions With!

When we asked Stephen about the making of the album, he commented,

“I started out with the idea of recording something away from Toronto, that may be strange for a record that is so much about the city, but I didn’t want that 9-5, go to the studio and then go home vibe. So when the idea of recording on Wolfe Island presented itself, I jumped at the chance. Then it grew so far beyond the original idea. The album became this collective experience, we are now (I hope) honourary islanders, so many wonderful people adopted us, fed us and spent so much time hanging out and listening to it all get made. Ultimately, many of these awesome folks ended up playing and singing on the record. Whether or not that shows up when someone listens to this is out of my control, but for me, it’s all there…”

Yes… I am born and raised in Toronto and spent many years as a lead guitarist/vocalist with The Lowest of the Low. Have years of touring and recording under my belt and have shared the stage with the likes of Billy Bragg, Bob Mould, The Violent Femmes, The Jayhawks and Lloyd Cole, also have a gold record for Shakespeare My Butt. This new band is something I am really excited about (with Chris Bennett, Chris Rellinger & Gregor Beresford), and this album was likely the most fun I have had recorded in my life. Hugh Christopher Brown produced it at his Post Office Studio on Wolfe Island, and was an absolute joy to work with…

I’m definitely a write what you know kind of guy, and this album is no exception. For me, this album is about living in a city that is changing right before our eyes, sometimes for the better often for the worse. So, these songs were my diary/therapy for the last few years…

Yes, we’ll be releasing Jimmy & the Moon on November 24th Canada-wide, with a show at the Rivoli in Toronto. Hugh Christopher Brown will also be there to release his beautiful album “Pacem”. We’ll follow up with more Canadian dates in the new year. Here’s the link to tickets for the release party.

One song… I would suggest “Jimmy & the Moon”. It captures all the themes, joy and heartbreak that make up this collection of songs.