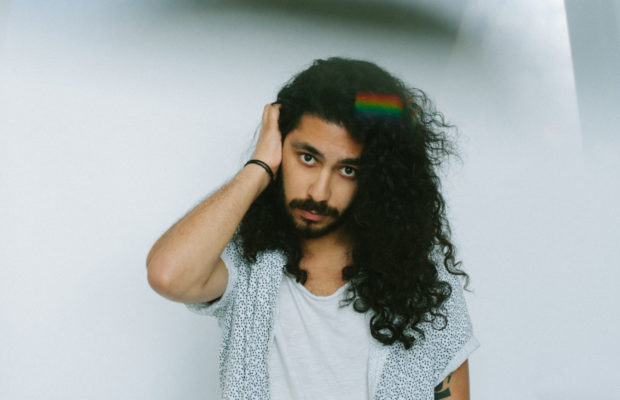 Mute Choir is a name you should get used to hearing. They’ve got the sound, they’ve got the look and frontman Sam Arion has got the story. Born in Iran, but raised in Toronto’s suburbia, Sam’s vocals alone tell the tale of someone wanting to find his own piece of freedom. Backed by solid melodies and poetic lyrics, it’s safe to say he’s making his way there.

Your new single “The Pedestrian” is a sort of coming-of-age story which your 30-something fans will be able to connect with in terms of their own “lost dreams”. Was there any instance that made you sit up and realize music was all you wanted to do?

It’s been more of an ongoing experience over a few years of actually coming to age and having to make decisions that will affect the course of my entire life, and coming to terms with the weight of those decisions. “The Pedestrian” is one scenario of the many un-appealing versions of our future selves we envision, and for me, it was someone living a life of mundanity, one where safety and comfort took precedence over passion and fulfilment, and ultimately happiness.

The single is not only something to listen to but something to truly feel inside with elements ranging from electronic, pop and even a bit of grunge along with those gritty vocals. Who would you say influenced you musically when starting out?

I’ve always listened to a huge variety of music from pretty much every genre. I’d say my influences range all over the map and work their way into the sonics within all of my songs; I remember reading an interview a while back where some members of Radiohead stated that a Miles Davis’ album was one of the biggest influences on Ok Computer, and if you listen you can hear it at parts, but the fact that the music was able to cross genre boundaries and influence such a vastly different piece of work I find to be very inspiring.

I have more huge influences than I could count on one hand, but the ones that affected me the most were the artists who shared a commonality in their ideology around creativity, thirst for exploration and experimentation. I strive to live up to that philosophy and always try to make something uniquely me, and unafraid of uncharted territory.

Your full-length album, Behind the Bars, is in the works now, but how long have the songs for the release been in your back pocket? Have they changed much over time?

It really varies from song to song. “The Pedestrian” for example, has little bits of different ideas that I wrote over 3 years ago, that ended up re-surfacing in this song when the time was right. But then some other tunes happened in a matter of a few hours. For me, a lot of songs get written in close proximity to events that inspire them. Writing often works in phases for me, some time must be spent living and experiencing life, and giving me something worth writing about. So, most ideas came over the years. But about a year ago now I moved into a basement in the west end and completely isolated myself to finish the album and work all those ideas into a finished cohesive product and that process was about 6 months, away from the sleeplessness and noise of downtown. A lot of the songs and ideas changed dramatically at that time as I realized what this collection of songs was as a whole.

Although you were signed to a major label at one point, Mute Choir has since become your own entity. What is the biggest freedom you’ve found since making the change?

Having final say over my work. Not worrying about the approval of anyone but myself, and that was especially important making the album and discovering my sound. There were no creative boundaries put around the music and no pre-conceptions of what it would be, but just an openness to trying new things, even if they were unfamiliar or unconventional.

Having just begun performing live with a full band this past summer, what was the biggest challenge you faced going from performing on your own to performing with a whole set of people?

Realizing most people in my band are taller than me. The struggle is real.

Whether it’s listening to your recorded music or seeing it live, what’s the goal when it comes to how people feel at the end of it all?

If for a moment people can transcend whatever circumstance they’re in, then I think I’ve succeeded.