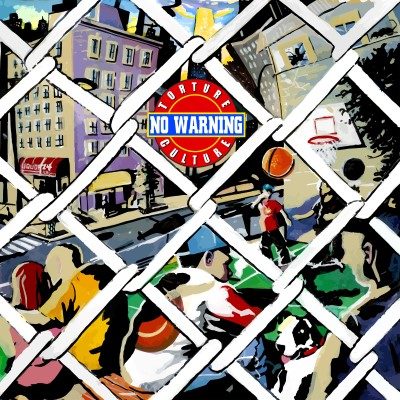 Toronto’s No Warning makes their dramatic return with the third record, Torture Culture.  Their latest release is the first from the band- fronted by Fucked Up’s Ben Cook- since their 2004 record, Suffer, Survive and continues from where the group left off with a metal sound reminiscent of the early 2000’s.

Much like their name implies, Torture Culture wastes no time easing the listener into the record, opening with “Headless”, a blistering song with guitars stemming from 1980’s thrash metal and vocals from 2000’s hard rock.  Following an incendiary guitar solo, No Warning dive head first into “In The City” which- if you’re not paying attention- sounds like it could be a second, slowed down segment to the opening track, giving the album a strong sense of continuity between tracks.  Tacks like “Hell Realm” and “No Influence (From The Outside World)” continue to display the same level of energy and intensity, only at slower tempos where the songs run on pounding drums and crunching riffs.

While there is no doubt that No Warning’s Torture Culture is a record that goes full throttle and refuses to let up at all over its length of twelve songs, there are certain elements of cheesiness that make the record less engaging than it could be.  For starters, Cook’s vocals- while powerful and commanding in their throaty yells- are often layered in a manner that makes him sound less like a metal singer, and more like a villain from a video game, ultimately making the anger and frustration expressed through the songwriting feel less validated.  Furthermore, the band sounds best when they take their inspiration from early Metallica, however, when they incorporate more elements from 2000’s metal, it makes the record feel like the band itself has not evolved as much as they should have in their thirteen-year absence.

Torture Culture marks the return of No Warning with a record that is both strong and flawed.  Despite this, fans of the band will find their latest release exciting, acting as a solid comeback album, one that is nostalgic of the past and should leave them looking forward to what else is to come.