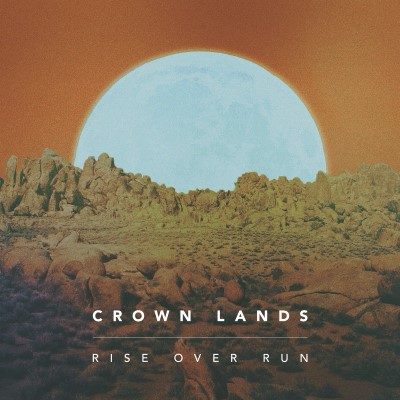 If you haven’t already heard, Crown Lands is a band to watch out for.  The winners of 97.7 HTZ FM Rocksearch contest have returned with their sophomoric record, Rise Over Run, a follow up to their explosive debut, Mantra released just over a year ago in August 2016. The Oshawa, Ontario duo- consisting of lead vocalist and drummer Cody Bowles and guitarist, bassist, and synth player Kevin Comeau, not only strike gold with their recent release but also affirm their position of one of Canada’s top up and coming rock bands.

Opening with “Constant Motion”, it is immediately clear that Rise Over Run, as their press release states, perfectly captures a sense of progressive rock of the late 1970’s and psychedelic rock of the late 60’s and early 70’s.  What their release did not mention is the band’s substantial blues rock element which truly ties the former two styles together in a way that is quintessentially that of the 70’s.  So much so, that if I didn’t know better, I would say that Rise Over Run was a lost gem from one of rock’s most experimental and explosive eras.  The following track, “Misery” is the record’s most explosive songs, and is among my favourites, with its fast pace, crunching riffs, howling vocals, larger than life drums, and an overall feeling that the song could combust and fall apart at any second; it feels dangerous and unpredictable, just how rock & roll should.

Over the EP’s six tracks, Crown Lands dig deep into the rich heritage of the blues and it is here where they most resemble some of classic rock’s greatest icons- including tinges of Cream and Led Zeppelin.  “Mountain” for instance, is a slow-moving monstrosity that lyrically- much like Iron Maiden’s “Run To The Hills”- explores the themes of European colonization of North America and how it affected the Indigenous population.  The song is driven by pounding drums and the crisp sound of a sliding guitar which contrasts with the songs hard hitting and thickly distorted power chords.  In short, the song absolutely rocks and is the most powerful performance from the band across Rise Over Run.

Whether it is the dark vibe of the album’s closing track, “Waterfall”, or the ambient jam of “Big River Road”, Rise Over Run is a spectacular release from not only one of Ontario’s, but Canada’s most promising rock bands.  By looking back into the past, Crown Lands have returned with a record that feels like flipping through crates of used vinyl on a Sunday afternoon when you accidentally stumble upon something that is truly great.  There is an element to Rise Over Run that already feels classic, making it among the best up and coming rock records that I have heard.