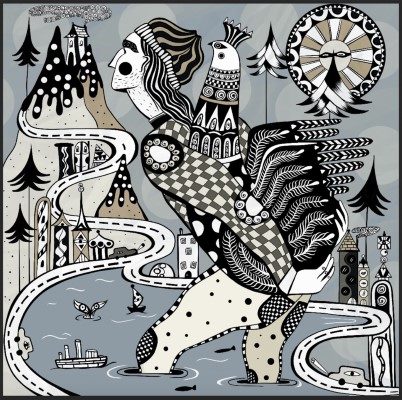 Matt Mays, where the hell have you been the past 5 years!?!?! Oh I know – Making the best damn album to come out of the East coast, ever!

Don’t believe me? I did not even get through half the album review before I stopped, went over to Matt Mays’ website, and pre-ordered the double vinyl. It was THAT good! I just needed to have it in my collection and knew I would regret it if I did not get it right away.

Once Upon a Hell of a Time is Matt’s sixth album, and it goes to show why Matt has gained notoriety coast to coast. I have to admit, I did not have a lot of focus on Matt until I heard When Angles Make Contact. For me, it was a concept album and I never heard anything like it. When I went back to the previous albums, I realized how much I missed, and I have been hooked ever since.

The entire album is just solid rock n’ roll. You want to sing to all the songs, you want to grab your best friend, your favourite brand of beer and dance under the stars, by a fire.

Every song is amazing on this album. That sounds so much like fan girl crushing, but seriously, when the first couple tracks were released, I was not a big fan of “Ola Volo”, but hearing it with the rest of the album, I just fell in love.

“Sentimental Sins” and “Station out of Range” have to be my favourite songs on the album. Both are full of emotion, feeling and just pull you in with a true emotional connection to the songs as he sings them. Every time “Station out Range” comes on, I catch myself almost crying, it is so heartwrenching when you listen to the lyrics. Just close your eyes and listen to it. These songs just sweep you in and carry you away. As for “Faint of Heart”, I may have lost my “out of tune” voice singing to this track.

I was fortunate to hear some of the songs on this album at one of his intimate Shore Club performances this summer. Matt is such an energetic and engaging performer, it makes listening to these songs all the better.

The entire album, front to back is a “Crank it up in the car”, “Sing it out loud”, “follow along until your heart cries from happiness/sadness”, piece of art that just makes my entire soul smile with happiness that I get to be alive and present to experience this. I don’t know how the rest of the nation truly appreciates this Canadian Gem, but for an East Coaster, this makes me happy.