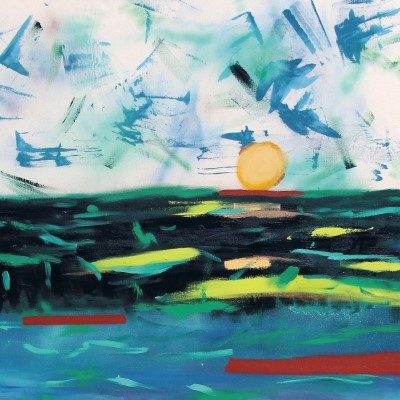 Experience – one word with so much meaning.

That’s just what The Kents did.

Hailing from Lindsay, Ontario, The Kents (Warren Frank – vocals, Freddy Kwon – guitar, Luke Shauf – Bass, and Tanner Paré – drums) explore many of the trials and tribulations that one experiences as they grow with the release of their sophomore EP, Within Waves. According to the lead singer Warren Frank, the songs on the album can be compared to “those classic coming-of-age Breakfast Club-type films.”  Awkward romances, the impact of family, and tests of personal faith are just some of the topics tackled on this EP.

The album begins with “From the Start”, a spacy indie rock track that starts off on a quieter side yet continues to become louder and more intense as the track progresses. A similar approach is used for ‘Distant’, as the musical arrangement creates the build-up of tension and suspense. This definitely keeps your attention as you feel the need to keep listening to see what comes next.

Through tracks such as “Caroline (I Can’t Explain)”, The Kents lure in their audience with a more upbeat melody dealing with subjects we can relate to. We’ve all been in situations where no matter what we did or how we tried, we just could not formulate the words to explain in as evident through the repetition of the lyrics “I can’t explain. I can’t explain.”

“Is There Anyone?” is pure creative genius. The use of different rhythmic approaches, such as the drums stopping at interesting spots throughout the song, definitely captivates the listener. The 80s/early 90s inspiration definitely shines through on this song, with lyrics fueled by uncertainty. “I can’t look back without the feeling that I’m missing something” is something we can all relate to and a feeling that many of us often have. This is definitely my favourite track on the album.

Rounding off the EP is “Low Light”, a mellow track with intriguing grinding guitar melodies and cool spacy echoing sounds. This arrangement portrays otherworldly vibes; almost as if you are floating along in another world.

To date The Kents have already had some pretty neat accomplishments; being featured on Apple Music’s 2016 Rising Stars, Spotify’s Best of 2016 Viral Hits, and  Hockey Night in Canada just to name a few. Now they can add yet another pretty awesome accomplishment to this growing list. Defying the superstition that Friday the 13th (and just the number 13 in general) is unlucky; The Kents definitely have a hit on their hands with the release of Within Waves!

Within Waves EP Tracklist:
From The Start
Caroline (I Can’t Explain)
Is There Anyone?
Distant
Low Light