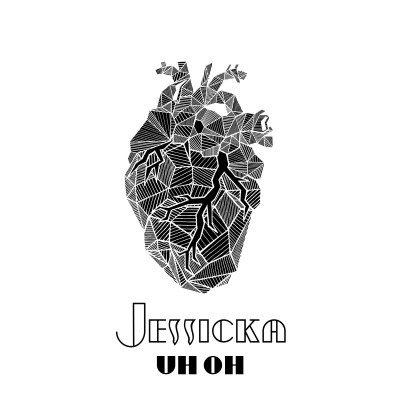 Known for her “heady and dark lyrical content” Jessicka has released her debut EP Uh Oh via Light Organ Records. Released on October 13, Uh Oh is a 5 track EP amass with different flavours – all expressing emotion and anger, helmed by a ton of fun and upbeat instrumental content.

The EP opens up with “Eve Of Your Leave”. Its rhythmic drums are the most captivating element of this track. Jessicka’s sultry vocals feel as if she’s personally conversing with the listener. Although the instrumental work is upbeat, there’s an underlying sense of melancholy hidden in Jessicka’s haunting voice, embodying the feeling one would imagine the title evokes.

The second track, “Hit Me Jane” opens up with a heavy, ominous sounding bassline. This song is anger personified. It screams ‘come at me – I dare you’. Jessicka’s restrained, menacing vocals spit out jeers and taunting questions: “Hit me Jane, harder now/ Go fuck yourself/ Are we still in love?”. Definitely, something you’ll be humming for weeks on end.

Although rhythmic and orchestral, “Was No More” is a melancholic tune. It calls to a former lover who has chosen another. “She touched you and I was no more/I used to be the only one you adored”.

The black sheep of the EP, “Wake Up” is a dreamy and dancey tune. The crisp, quick vocals definitely make this song fun to sing along to. It’s an upbeat song, perfect for a girls night out. This track belongs in a nightclub for sure.

The title track, “Uh Oh” closes the album with “I want to punch you in the fucking face” as the opening line. With such an honest and brash opening, what’s not to love? There are a number of different sounds condensed into this one track. It harnesses orchestral and baroque sounds, making the track sound threatening and ‘circus-y’. This track evokes feelings that we’ve all felt at some point but never said aloud.

On Uh Oh Jessicka is open and honest and wears her heart on her knuckles. Her dark lyrics and ominous sound give a voice to strong feelings people only wish to let out in such a creative manner.