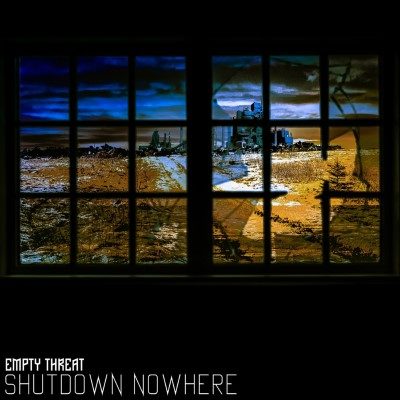 Earlier this month; on October 5, Empty Threat released their new EP Shutdown Nowhere. Bringing out styles similar to Three Days Grace, Billy Talent and Rise Against, this Ontario band fuses punk, grunge and heavy rock styles. Though originally forming in 2011 it wasn’t till 2014/2015 when they solidified their current lineup.

Vocalist and guitarist Michael Ronane states “We also want people to know first and foremost our band is about creating passionate music that may resonate with other people. On the surface, we make music that has a carefully crafted intensity – like a chained beast tugging at the leash. For those who want to dig deeper, they see how this sound represents us, as people, and our struggles to reach our potential. We connect with our fans through these shared emotions.”

The first single off the track is “Out of Sync”, this song had caught me by surprise from the start.  Mixing elements of grunge, punk and metal. The song sets a base for the rest of the album and brings out the high-energy and emotionally perspectives on various day to day issues. “Out Of Sync” kicks off lyrically with “stitch me back together I’m a broken glass” describing the feeling of disconnection from oneself, which flows through the rest of the album’s themes.

“Accommodate”, I picked this song after reading what the band described the aim of the theme to be. Going into it, I feel like I accommodate everyone around me and don’t focus on myself as much as I should. The band states that “This song is a rejection of the negativity of those around you. It criticizes censorship and control of others for your own beliefs or not taking responsibility for yourself. The lyrics chastise extremism and societal pressures. It challenges you to hold yourself accountable and develop yourself, instead of being held up by rich parents, politicians, religion, or popular opinions. The music is a droning, slow-burning flame that gradually roars to life in a blaze of disdain for taking advantage of others around you.”. The song eerily opens up with a guitar while the drums follow, coming in with the lyrics “never knocked down, never beaten” reflects back on the motif of the song about the negativity around you and taking responsibility for yourself.

The final song on the EP; “Knots (More Than Just Words)” was another of those songs that reflects on today’s age. We as individuals get wrapped up an adult driven society and don’t have time to reflect on our youth with the lyrics “We lead a path back to reason, take me back in time to childhood stories meant something more than just words”.

The album as a whole is something that will make you reflect on your day to day actions but also brings in the punk-rock ideals we grew up learning about. Empty Threat seems to target all audiences. If you’re only just getting into punk or metal bands then definitely check it out as it’s not overly aggressive but at the same time if you love your punk ideals the album has a ton for you as well.