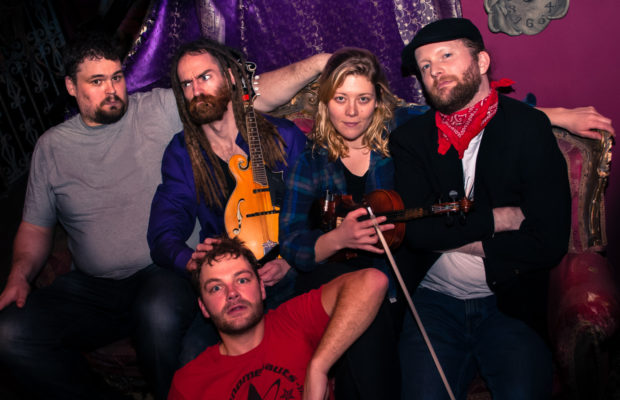 Vancouver based band, The Dreadnoughts are set to release their highly anticipated album, Foreign Skies on November 10, and we were fortunate enough to have a chat with them in advance. Find out more about the album, tour and more! Also, if you’re able to catch them up at any of their upcoming tour dates, we recommend you do.

Hi readers!  We’re the Dreadnoughts!  We’re an insane group of musicians and medium-functioning alcoholics who make music that has been variously described as polka-punk, clusterfolk, and even “world-core”.  We don’t know what any of that means.

You are back from hiatus and about to release a brand new album, Foreign Skies on November 10, what made you come out of hiding for this release?

Honestly, people just kept bugging us about it, and it made us realize (and be thankful for!) the fact that people were still listening to us after all these years.  Also, seven years went by, and almost no-one had really made anything new and exciting in the folk-punk genre.  All the older, legendary bands had become stale and boring, and almost everything new was still “let’s pretend to be Irish, fiddly-dee, whiskey.”  We decided that this envelope needed another good push, ya know?

Foreign Skies is an ode to the centennial anniversary of the First World War, can you tell us more about the background of the album?

We’ve always done songs with a historical angle.  It’s just a really fun and interesting thing to do.  But then the centennial came, and people were paying a lot of attention to the First World War.  That war, maybe more than any other in recent history, is so full of meaning and symbolism and fantastic stories.  So we thought: why not give it a go?

You released the video for the lead single from the album, “Back Home in Bristol” on October 18, can you tell us a bit about the making of the video?

Well, one of our deepest and truest loves is for proper scrumpy cider, lovely bitter-sweet stuff made from real cider apples in places like southwestern England.  (Like I said, medium-functioning alcoholics.)  This love has brought us back to that part of the world many, many times, and it’s inspired our songs and our performances over and over again.  We miss it when we’re away.  So it was natural to write a song about a soldier who also misses Bristol, and something that really stood out from WWI was the number of soldiers shot by their own forces for ‘cowardice’… even after they’d endued the worst psychological trauma imaginable.

So we were booked to play a festival in Bristol, and we thought: let’s shoot a video about how much we love the place.

Just drinking cider in the pub with all our Bristolian friends.  We’re not fancy.

On top of the new album, you are taking off on a cross-Canada tour, what can fans expect from this live show?

It’s chaotic, booze-fuelled, Dionysian revelry.  We spend a lot of time shouting at the audience, making fun of them, whipping them into a frenzy, inviting them on stage to participate, etc.  When we’re in the zone, which we manage for most gigs, we utterly ignore or actively make fun of music industry clichés: we have no scripted intros, no recorded backing tracks, no choreography.  We’ll let songs self-destruct for fun.  We’ll count “1! 2! 3! 4!” to start a song and then do absolutely nothing and laugh as the audience starts bouncing around to silence.  We’ll hold impromptu drinking competitions, we’ll let audience members play our instruments.   It’s fun.

If someone has yet to see you live, what are 3 words you would use to describe your performance?

When can fans on the East Coast expect tour dates from you?

It’s tough for any Vancouver-based band to get that far out East… to come that far you can’t just be playing someone’s basement, ya know.  So here’s the deal: someone get us a spot at the annual Stan Rogers music festival and we’ll come!

Ha!  You know as well as we do that our fans can’t read.