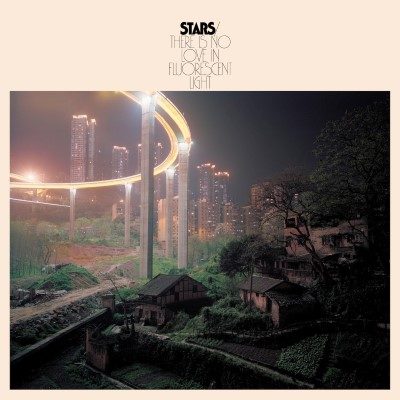 In an era where a full-length record seems to have been redefined to 7 to 9 tracks Montreal based indie-pop icons, Stars offer a breath of fresh air with their 8th studio offering, There Is No Love in Fluorescent Light, clocking in at a satisfying 50 minutes. Joining forces with longtime The National (among many others) producer, Peter Katis, the album sees the band returning to their synth driven dreamy pop roots after a brief dive into the more dance oriented world of 2014’s disco inspired No One Is Lost.

The lyrical fodder of the album adds nothing new to the near two decade conversation taking place between co-singers Amy Millan and Torquil Campbell. The listener is left with a comforting feeling of the familiar as the duo dissect the fragile interpersonal relationships that leave our hearts tattered and torn, hollow shells where unmet expectations once lived. Despite their lengthy history pondering the many ways in which love sours and lovers strive to find connection, the songs just manage to sidestep a feeling of repetition and instead settle nicely in the realm of warm consistency.

The darkness of the overarching themes of There Is No Light… desperation, disappointment, isolation, loneliness and mistrust are a stark contrast to Millan’s high, clear vocals which set an ethereal tone from the open of the lead track “Privilege”. Campbell’s more soulful vox prove again to be a perfect counterpoint in a well-honed interplay between the duo, lending a believable conversational feel to their exchanges and adding depth and fullness to harmonies.

Musically the album is filled with the intricate guitars and lush synth lines one expects from Stars with a few surprises mixed in. The namesake “Fluorescent Light” is a bright pop excursion that whisks you quickly back to the saccharine synthpop of the 80’s in the best of ways. The stand out track on the album is, the undoubtedly destined for radio, “Real Thing”, with its punchy chorus and shifting time signatures. The languishing and moody “The Maze” holds its own and serves as Campbell’s showpiece on the record which he does not waste, packing emotional punches as he weaves between maudlin verses and quietly raging chorus. Closing out the album an anticlimactic, yet cathartic “Wanderers” manages to summarize story points hit earlier in the album while retaining a freshness.

Though not reinventing the wheel the latest offering from Stars proves that when you know your strengths and play to them you don’t always need to innovate what already works. There Is No Love in Fluorescent Light is a warm blanket to wrap yourself in as the days continue to grow colder and darker.