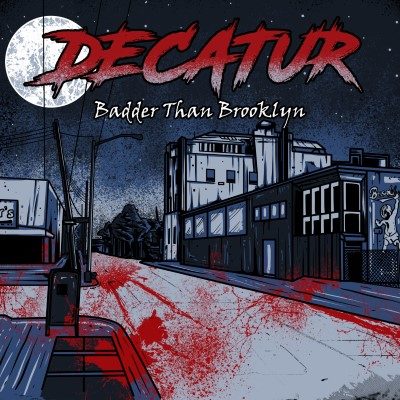 One Line Review:  Toronto-based Decatur, with their debut release Badder Than Brooklyn, has created a metal album for metal’s sake, a traditionally fast, heavy riffing, drivingly intense set of tunes to be included on an FM radio station in the next installment of Grand Theft Auto playing between Megadeth’s “Holy War…The Punishment Due”, Metallica’s “Battery”, and right after Pantera’s “Walk”.

So does Decatur, and they are preaching the gospel of the Golden Age of Modern Metal!

Badder Than Brooklyn feels familiar yet foreign, established yet exciting, influenced yet original, a classic metal record mixed with inventiveness and excitement and like meeting your best-friend’s best-friend you never knew they had.

From the onset, listeners are prepared for an intense listening experience with cover art that looks like a graphic on a GTA, or Madworld, cinema level, a darkened, animated street splattered with blood stains and tire tracks.

(A reviewer’s friend has started a video series of following a set of bloody wheelchair marks that have been appearing on a regular basis in her downtown neighbourhood.  A character from the Badder Than Brooklyn cover art perhaps, come to life like a demented version of the A-Ha “Take On Me” video?)

Discussing Decatur’s over-all musical vision, vocalist and guitarist Jay Sarrazin says,  “We honestly feel like metal has lost its way a bit and we were set on writing something original and not following the trends of today such as low tunings, aggressive growling and perfectly lined up music and sound.”

He continues, “We focused on the realness of ourselves and wanted to produce something that wasn’t always perfect and was as real and as honest as we could be.”  Decatur’s musical honesty is abundant on Badder Than Brooklyn adding a sense of earnest sincerity from track to track.

Continuing with the idea musical, and lyrical, honesty, Decatur explains the concept of the record by saying it, “is to give those who struggle with mental illness a place to feel safe or a place to feel like they are not alone. That there are others out there going through the exact same feelings and emotions as they are and hopefully listening to this record makes them feel a little calmer, a little safer, a little less alone.”

Their debut album Badder Than Brooklyn, produced by Joe Duplantier (Gojira), is named after their very own “Street of Dreams” in New York, where they recorded their debut album at Silvercord Studios in Brooklyn.  With the searing opening of “Internal War”, the metal-grove influence of “Vegas Girl”, the steady pulse-drive of “Tear You”, to the melodic instrumental closer “Internal War pt. II”, Decatur pays homage to metal influences such as Megadeth, Metallica, Pantera and In Flames while adding their own signature sounds and original songwriting.

Masterfully played and cleanly produced, Badder Than Brooklyn is traditional, contemporary and timeless, the Grim Reaper’s grain of sands sifting between the past and present in his eternally clutched hourglass.

As a reviewer who is known for going into overly-long, indulgently exalted reviews, I feel the need to be concise and pointed with the same sense of precision Decatur brings to their debut album, despite the already over-all length of this review.

Listeners can hear the honest urgency and loving delivery on every tune, the music being the message and the message being metal!

Add Badder Than Brooklyn as part of the canonical, all killer no filler, metal section of your music library!