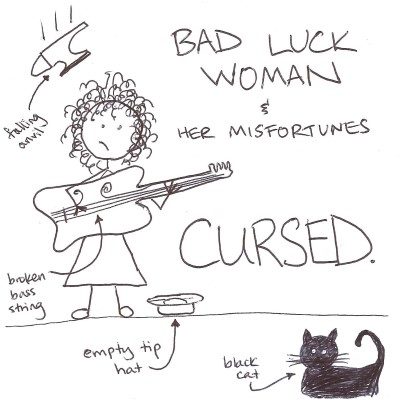 While Toronto’s Bad Luck Woman & Her Misfortunes released their debut album in the second quarter of 2016, Cursed is beginning to make waves, and for good reason. The quartet- and on occasion, sextet- led and formed by lead vocalist and bassist Raha Javanfar pays tribute to who they refer to as the “sassy ladies of the 50’s and 60’s”, such as Ella Johnson, Big Maybelle, and Dolly Cooper.  As a result, Cursed is an excellent ten track album of covers- with one original- that celebrates women of the blues, jazz, and early R&B.

Immediately upon hearing the first notes of Julia Lee’s “Snatch & Grab It”, the records opening track, it is apparent that Javanfar’s voice is one that perfectly fits within the continuum of the styles.  She sounds breathy in the higher register, powerful as an alto and raspy when she needs to be; ultimately, it is her vocal mastery that allows for her to perfectly communicate a sense of playfulness and emotion in her voice that was an essential element to the style of the time.  Whether the band is playing in the style of a big band (“Snatch & Grab It”), a sultry groove (“I Don’t Know About You”), or a hard blues (“Bad Luck Woman”), they are tight and quite obviously well versed in the varying nuisances of the repertoire and genres, making the record that much better of a tribute.  Like a time capsule, Bad Luck Woman & Her Misfortunes will take you to a smoky lounge of the 50’s; the only thing modern about the record being the clarity of the recording, granted by today’s technology.

While the attention of Cursed is most certainly centred around the material, artists, and styles that the Bad Luck Woman & Her Misfortunes choose to honour, the Javanfar original, “Take Our Time Together” is in itself, a beautifully written tribute to the classic R&B style of the 50’s and 60’s.  The track fits seamlessly with the others on the album as well as the history of the genre.  Before reading the groups press release, I actually thought the song was a lost gem from the era.  Rather, “Take Our Time Together” is a melodic 12/8 shuffle that allows for Javanfar’s vocals to soar over a steady and soft groove with rhythmic shots and features a guitar solo from Fraser Melvin and a sax solo from Andrew Moljgun- both of which are just as emotional and lyrical as Javanfar.

Bad Luck Woman & Her Misfortunes’ debut Cursed is, by any standards, an exceptional collection of songs which celebrate the blues and R&B of the 50’s and 60’s.  Furthermore, the groups choice the champion many of the unsung female voices who pioneered the styles makes their tribute that much more special.  While everyone has heard of legends of the likes of Ella Fitzgerald and Aretha Franklin, when looking back on the blues, jazz, and- to some extent- early R&B, these genres are often dominated by male figures in our collective memory.  Artists such as Julia Lee, Little Sylvia, Dolly Cooper, and Carmen Taylor had highly influential careers, but are more well known to the hard-core record collectors and aficionados of such periods.  Perhaps it is not only the band’s tasteful and impeccable performance and their choice to specifically honour female musicians, but also their decision to exclude better-known icons like Franklin and Fitzgerald that makes the record all the more special.  Regardless, Cursed is phenomenal and leaves me excited to see what Bad Luck Woman & Her Misfortunes will do next.