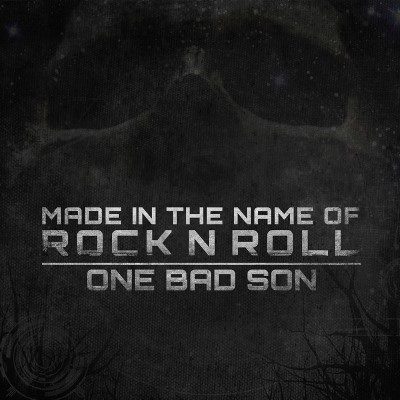 Saskatoon band One Bad Son released their album, Made In The Name of Rock N Roll and it definitely makes an impression. The band has been around since 2004 and have seen great success this year already with their song “Raging Bull” being on the BDS Mainstream Rock chart top five for 14 weeks.

The album kicks off with a bang with the title track. You can hear and feel the passion of this band behind their music, their lyrics delivered in the quintessential rock sound with their shredding guitars, raspy vocals, and catchy choruses. Split into two sides, ten songs in total, this album has the power to make anyone that enjoys the genre fall for One Bad Son. “The Promise” shows off their affinity for guitar riffs that will give the listener more than an earful. Sounding similar to the legendary band Guns n Roses, the harmonized vocals pull you into the song and refuse to let go until the last note rings out.

One Bad Son clearly know how to grab a listener’s attention and make themselves heard, loud and proud of their music. This album is hands down one of the best rock albums I’ve personally heard this year and I’m sure I’m not alone. The band has definitely made themselves a name in the world of rock n roll, and will surely continue for years to come.