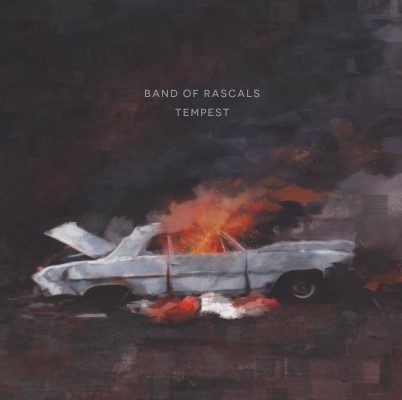 Vancouver’s Band Of Rascals are back with their brand new release, Tempest.  Produced by Eric Ratz (Billy Talent, Monster Truck, Arkells), the EP serves not only as a follow up to their 2014 self-titled debut EP but also serves as a reminder as to why the band is one of BC’s premier up and coming rock bands.

The album opens with the slow grooves and blues-inspired riffs of “Holler”.  The track gives the album a gradual buildup as the track itself slowly develops into something much bigger than is initially heard.  By contrast, the second track, “Little Longer Now” is an explosive and impressively rhythmic take on the similar blues-rock style heard in “Holler”.  Between the two tracks, it is clear that Band Of Rascals is capable of delivering hard-hitting rockers along with softer songs which demonstrate a sense of maturity and sophistication in the group’s songwriting.

Despite being an all-around great EP, it is the latter half of the record that shines the brightest. “Seas Coming Down”, with its retro-sounding harmonic line and smooth solo over crunching chords feels reminiscent of The Guess Who’s “American Woman” while the closing track, “Control” is the hardest on the record and pulls no punches with its killer riff, guitar licks, and tight groove.  While it is tough to choose one track as my favourite on the record, it would likely be a draw between these two and “Reaction” a hazy slow burner that grows into an intense and incendiary guitar solo and final chorus, proving to be not only one of the album’s most exciting tracks, but also one of the strongest examples of writing from Band Of Rascals.

For their sophomoric release, Band Of Rascals went all out to make sure this record covered as much ground within the blues rock genre while ensuring every aspect was as solid as it could be.  As a result, Holler captures the band as a tight unit who write some of the best blues inspired rock tunes I have heard from an up and coming band.  Not only is this album truly enjoyable to listen to, but it stands as one of the best modern rock albums I have heard all year.  Band Of Rascals is without a doubt a band to watch out for as they hopefully begin to mount a more national presence as one of Canada’s top tier new rock bands.