We had the chance to chat with Jay & James, as well as Simon & Milo from Prozzäk in advance of their Forever 99 Halloween Freakout! show that will take place on October 28 at Toronto’s 401 Mini Indy! The show will see Prozzäk co-headlining with Green Velvet, Culture Shock, Christopher Lawrence and Micky Finn and many more. Prozzäk will also be joined by special guest Lowell. The night will be something you don’t want to miss with music, a massive professional haunted house, go-karting and glow-in-the-dark mini golf! So if you’re 19+ and want to attend this Halloween event, get more info HERE and grab your tickets HERE.

Now, it’s time to enjoy our interview with Prozzäk, and get yourself in the Halloween spirit! 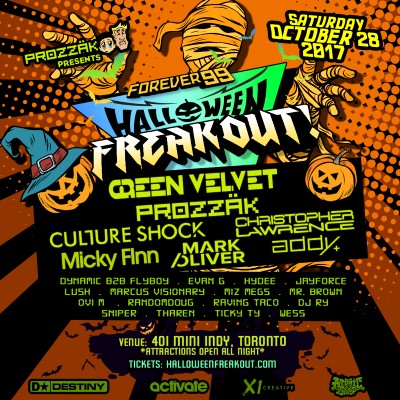 First off, with Forever ’99 Halloween Freakout being a Halloween themed show, will you be dressing up? If so, can you give us any hints as to what you’ll be?

Milo: We are freaking cartoons, we have no control over our wardrobe! As for Jay and James, we will see, but don’t expect them to dress as Pennywise the Clown.

You will be co-headlining the event with Green Velvet, Culture Shock, Christopher Lawrence and Micky Finn, what can fans expect from this live show?

James: One of our first gigs was World Electronic Music Festival(WEMF) back in the day, so this party is both a return to our dance roots and an evolution of the cosplay and general freakiness of a “typical” Prozzak show. This time, EVERYONE will be dressing up, dancing longer, and can ride go-karts and play glow in the dark mini putt if they want. This is truly next level!

Do you have any favourite Halloween stories that you are able to share?

Simon: My Grandfather used to tell us about The Eraser. It was a giant rubber that visited cartoons while they slept and by morning they would be nothing more than a smudge mark on their bed. I was terrified!

After the show, will you be taking in some glow-in-the-dark mini golf or the haunted house?

Jay: We had a tour of the Haunted House last week and even though we saw behind the scenes, it freaked me out.

James: Perhaps a lap or two in a go-kart for me.

James: A scary soundtrack and pitch black. There’s nothing more terrifying than my imagination!

You guys are from Toronto, but what do you think of New Brunswick making it illegal to trick or treat after the age of 16?

Jay: Are teenage trick or treaters that much of a threat in New Brunswick that they need to ban them?

James: As a parent who hands out candy, my biggest issue with teenage trick or treaters is they usually don’t bother dressing up, so why should they get candy? If they put in the effort on a good costume, it’s all good.

Will the show feature any new music?

James: For those fans who missed our last tour, we’ll play some new songs from our latest album Forever 1999, alongside all the classics. Plus some extended dancey bits just because we can.

Do you feel that being so influential in the 90’s that bands often look to you for inspiration or try to redevelop your style as a band?

Jay: We’ve had a lot of young bands send us covers of our songs over the years and that’s always fun to hear. Punk bands usually, which surprised us at first.

James: An animated web series, a musical, and of course global domination.