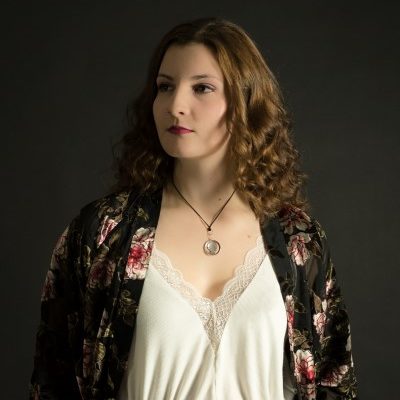 We recently had a chat with Edmonton based blues/rock artist, Danielle Dayton about her upcoming EP, which is set to be released November 25 and more. Enjoy!

I have been writing and performing music since I was 14. There’s something about high school that makes you search for an outlet to throw your angst into. Since I started writing songs, I haven’t been able to stop and here we are 8 years later. I’m originally from Calgary, and now I’m living in Edmonton. If you’re an artist in any capacity, I highly suggest Edmonton. It has some great things going on!

I am interested in writing about strong women. I think it’s because, as a female artist, there are some situations and scenarios (as we know) where you can feel utterly powerless. Those are stories for another time but all I’ll say for now is, if you are female, walk into a music store and that is a good start at beginning to feel the condescension. On the flip side, if you want a great and empowering experience at a music store, ask for Peter at Long and McQuade in South Calgary – what a lovely, lovely human.

I have had the pleasure of meeting women who have some incredible stories to tell and the inspiration for some of my songs can be traced back to their stories. Run is about I women I met walking down the street. She was lost in suburbia looking for her daughter’s baby shower. I offered to drive her on my way out of the neighbourhood and in the five-minute car ride; she shared an overview of her life, the good and the bad.

I am fascinated with creating. Whether it’s the first spark of inspiration, the editing stage or the I –have-no-idea-what-the-hell-this-is stage, I need it all. There are times when I can write a song in 20 minutes, and there are times where an idea won’t take shape for months on end. Creating is my spiritual fuel. One day my creativity is an empty well and the next day ideas smack me upside the head. It’s exciting.

Music is my main love, but dance and theatre are also my sanctuaries and they are all wrapped up in each other in a beautifully connected constellation. They are allies in performance.

This is a tough one! Each of my songs has taken shape in quite different ways. My favourite processes have been writing lyrics and melodies when I drive, especially trips between Edmonton and Calgary; makes time pass a little quicker. I’m also a big fan of writing a groovy riff first then lyrics and melody second. I have tried writing words first then melody second – this is less productive for me because the melody has a way of revelling the words to you. A Little trick I learned from my girl Sia in her Howard Stern interview.

When I first started writing music, my songs were Country. Which makes sense because it’s what I grew up listening to; The Dixie Chicks, Garth Brooks, Tim McGraw, Terri Clarke and others.

I have found my sound in the blues-rock genre; to me the most fulfilling song to write and perform is one with copious amounts of soul. Every now and then a country song comes out and I tuck it away, but my main direction is delicious blues, rock and soul.

My EP release shows are coming up fast! November 25th is the official release of my EP “Run.” My release party in Edmonton is Saturday, November 25th at the Empress Ale House at 4 pm, which will be a rocking full band show. My release party in Calgary will be Sunday, November 19th at Café Koi, which will be a stripped-down acoustic show and also a matinee. You can get the full details on my website or Facebook page.

Creating a live performance has been a learning experience that I don’t think will ever end. I don’t think it does for any artist. I have constantly been experimenting with what works. I have recently found that you can prepare what you want to do and say, but a lot of it has to do with the audience you are performing for that particular night. Last night I was opening for Travis James at Café Koi in Calgary and a lot of my show consisted of talking to tables in the crowd and adjusting the songs I played to what we spoke about. I think my favourite part of that show was when I dedicated a love song to a couple of people who looked like they were on their first date, but quickly taking it back when the woman called out “we are cousins!” Oops! I am used to theatre where each performance is different depending on the audience, so I like to bring this into my music performances. I would explain my performance style as spontaneous.

I also host a songwriters in the round show called Song & Story which focuses on creating a community for artists to share the inspiration behind their original songs and play them to audiences who are there to listen and support local original music.

I am proud of all the songs on my EP, but I would say my song “Fatal Love” is a good place to start! You will have to wait until the release on November 25th and you can sign up for my email list to stay in the loop with that. Just go to my website to sign up, and you will get a free download of my single on October 15th!

I am loving the music that is coming out of Alberta right now! Brett McCrady just released his EP “Drifting Through the Ordinary,” Ken Stead, Erin Kay, Sister Ray, City Sleep, RIELL, Tyler Lizotte, Wuhu and so many others! There are lots of talented musicians coming out of Calgary and Edmonton. Check ‘em out!