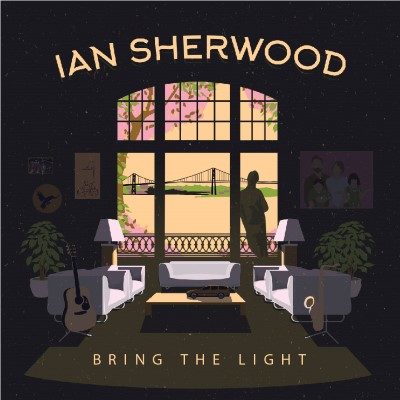 So, I’ve been experiencing a rough few weeks and whenever I’m struggling one of the main things I turn to is music to help me through it. So, when I was given Ian Sherwood’s latest album Bring the Light to review it did just that, it brought a brightness and it felt like my heart had been given a hug. I immediately sent the link to several of my friends whom I knew would appreciate it or could use a good heart-hug. One of my closest friends bounced messages back and forth with me for most of the day talking about just who Sherwood reminds us of and how much we dug the songs.

Sherwood is a natural storyteller who isn’t sure whether or not he’s folk or rock and the resulting combination of sounds is refreshing; it’s a really timeless sound. My friend described it perfectly by saying “it’s leaving me with this weird vibe that I have heard every song before”. It’s like putting on that perfect, comfy pair of jeans you forgot about in the bottom of your drawer and realized that they still fit.

Effortlessly transitioning between styles, the evidence of his influences is quite strong – everything from Del Barber, John Mellencamp, Bruce Springsteen, Blue Rodeo, Joel Plaskett, and even heart-tugging threads of Tom Petty. You need to listen to this album. My friend proclaimed that “it’s not like he’s stealing, but like he’s wearing his influences on his sleeve and his influences are some of the best folk/pop/country singer-songwriters” so we all win.

It helps that it’s slickly produced too with a smoothness that coddles your ears.

I honestly can’t pick a favourite song on this album. It’s just so good and I love all of them and it just gets better and better with each song. “Firefly” has an early-21st-Century folk revival sound with a driving drum, whistle, and building layers. “I See Red” is an aching, insistent ballad about the frustration of loving someone who makes it hard to love them and who is bad for you. “Hits Me Right” is a rough, gritty rock song that hits you right in the chest – pun totally intended. My favourite lyric though would have to come from the chorus of “Know the Darkness” where Sherwood counsels “don’t waste your wishes and nickels on broken-down wells.”

Sherwood is a poet who weaves images beautifully and if music has charms to soothe the savage beast than his voice might even cause my husband’s ex-wife to chill out. Don’t take my word for it either – he won himself a 2013 Canadian Folk Music Award for Contemporary Singer; the man oozes talent. And what’s even better news is that this is this FIFTH album. There’s more of this guy out there to soak in. And for the rest of the week that’s exactly what I’m doing – putting all of his albums on repeat and soaking in them like a hot bath. I recommend you do the same.