Interview – In My Coma 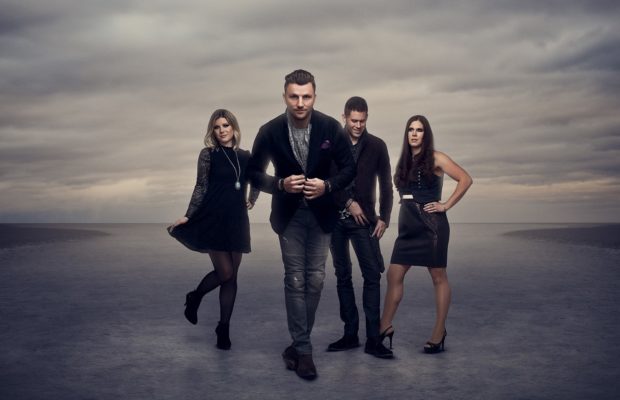 Toronto-based alternative rock band, In My Coma took some time out of their busy schedule to chat with us this week about their brand new album, Next Life, which came out on October 6th.  Hear what they have to say about working with Mark Makoway from Moist, the fun they had backstage with USS this past summer and their tour must-haves!

Hi IN MY COMA, please introduce yourself!

Hey there, this is Jasper, Laura, Mike, and Linz and we’re In My Coma a rock band from Toronto. We have a new album out now called Next Life. Our first single, Take A Ride, hits radio in the next few weeks and we have a music video for our song Beautiful Mind out right now.”

Your first album, Magnets & Miracles was released in 2011. A lot of life has been experienced by the members of your band since that time.  How has this affected your new album, Next Life?

We obviously learned a lot after our first album. Any success we had after that album was solely down to our own work ethic in playing shows, reaching out to potential fans, etc. We had a lot of ups and downs, but the group stayed together through thick and thin and now here we are. All that work post-Magnets has led us to where we are today with a great team in place and a new album we’re incredibly proud of.

You had the chance to work with Canadian rock royalty, Mark Makoway (Moist), as the producer of your new album. How was the experience?

It’s hard to put into words how much of an influence Mark was on this album. I don’t mean just his style or guitar playing, but his mentality towards music was an awakening for me. I’m not very talkative when it comes to what my lyrics are about, but Mark focused so much of his energy on the voice of the songs. I’ve never thought so hard about what life our songs breathe until sitting with Mark. When we went in to record the album, he really pushed us to love every aspect of the songs, every nuance, every mistake, every take. There’s beauty in the cracks in the walls. On our first album, we plastered over those cracks, but on Next Life, we studied those cracks and expanded on them.

We know that In My Coma dedicate all of their energy into the live show experience.  Did this play into your decision to record Next Life ‘live off the floor’?

We definitely wanted to capture the energy and togetherness we feel when we’re performing. This whole album has come to be as a result of us sticking together through tough times, so on a sentimental level, it made sense to record live off the floor as a team.

Which song from Next Life are you most proud to share with your fans?

I think every member is proud of a different song off the album, but I think I’m most proud of the title track, Next Life. For the longest time, I believed I had set the bar with my songwriting after a song on the new album called We Are One. And going into pre-production, I’d assumed it was our best song and would continue to be our best song. Mark challenged me to do better than that song, which was difficult and in all honesty, probably a little annoying to me. But I’m not one to shy away from a challenge, so I accepted it and went on my little songwriting binge. Then, one night, I finished up a demo track for Next Life, flipped it over to Mark and the band by e-mail, and everyone was instantly hooked. In fact, one of the first times we rehearsed the song at our rehearsal space, another band knocked on our door just to ask what we were playing. That’s never happened to us before. So that song helped to remind me that there’s never a ceiling you can’t surpass.

Your album release concert is on October 26th at Horseshoe Tavern in Toronto.  Are there plans for a tour in the near future?

There are definitely plans in the works, which will be announced sometime in the near future!

Do you prefer a small, intimate venue or a large stage for a concert?

It’s hard not to think about the amazing crowd we had at the CNE last month. That for us was a reminder of how hard we worked to get to where we are now. So even if not for the cheers and amazing feedback we received from the crowd, USS, and the Edge at that show, the symbolism of the whole night would win the battle for me. Large stages wins!

You recently had the chance to open up for USS at the Canadian National Exhibition in Toronto.  How awesome was that?

It was amazing. USS and the Edge selected us to open the show and we got a chance to chat with Ash and Jay beforehand. Ash was unbelievably complimentary of our melodies and kept singing the chorus of our song We Are One in the halls. Later, while I was getting my earpiece set up backstage, Ash burst into the room singing the chorus of We Are One again before we went on stage. The crowd was amazing, the technicians were great, the reception was fantastic, and the motivation was unstoppable. My favourite moment was right before our last song when someone from the crowd yelled, “This is the first day of the rest of your lives!” It was such a bizarre comment to hear that I couldn’t help but chuckle.

This question is for Laura Doll:  Congratulations on the birth of your beautiful little girl!  What has been your experience in managing both worlds of being a mother and an artist so far?

Multitasking!  I am holding my baby in one arm as I answer this question on my iPhone with my other hand!

My experience has been great so far. I am really lucky to have a great network of support so I’ve still been able to get to all the shows and rehearsals. We also did some video filming when I was 3 months pregnant before I started to really show – so planning ahead works too! So what a lot of people don’t know is that in the Beautiful Mind video we just released, my parts were filmed about a year ago and I was 3 months pregnant at the time!

I was already a planner and super-time manager pre-baby, so having a baby while being a busy musician has just further solidified those qualities in me.

What are the three must-have items you would take with you on tour?

What three words best describe In My Coma?

Read our review of Next Life and check out the official music video for “Beautiful Mind”, below!