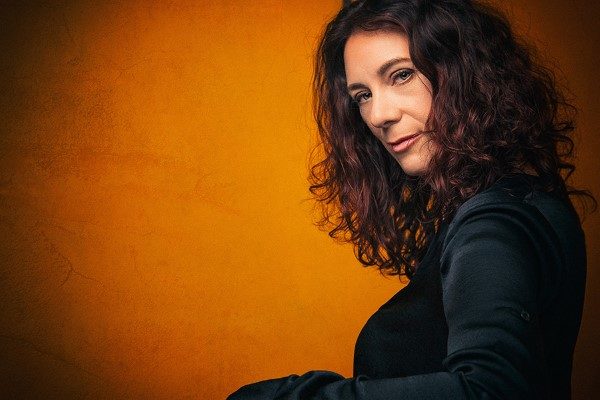 We recently had a chat with Calgary based flamenco guitarist, Holly Blazina. Holly will be releasing her new album, Transcendencia on October 13, and we were pleased to get the chance to ask her a few questions via our newest segment of Five Questions With. Enjoy!

Hi! I’m Holly Blazina, flamenco guitarist. I have no genetic roots in Spain and no gypsy blood that I know of. I’m the only one in my family who plays music, and my relatives joke that they wisely pooled all our musical genes into one person. Ever since I was a child, I’ve been fascinated by the guitar, but also by Spanish language & culture. I can honestly say that I wanted to play flamenco before I even knew what it was. It was like following a trail of breadcrumbs – I took up playing classical guitar because that was ‘almost it,’ and when I discovered Paco de Lucia’s work, it was like being in love. I started studying the flamenco guitar in earnest in 1996 and haven’t looked back since.

My music has its roots in the flamenco tradition. This is the style I’ve studied most extensively, but I’m also classically trained. I’m always open to other sounds I hear that I think can be integrated well into the flamenco style – which is a lot of things, given that flamenco itself is a melting pot of culture, tradition and sound. It’s been influenced by the music and culture of the Middle East, Andalusia, South America, even North American jazz and pop. I like the modern style especially, which maintains the punchy, aggressive way of playing, but includes lush harmonies that are relatively new to flamenco. I incorporate a lot of those elements into my playing, which explores the technical and expressive potential of the nylon string guitar to its full capacity.

“Transcendencia”, the title track. I wrote this piece for Amir Amiri to play with me on the album and started it just a couple of weeks before we went into the studio. It fully took shape during the rehearsals a couple of days before we recorded, when the full band came together for the first time.