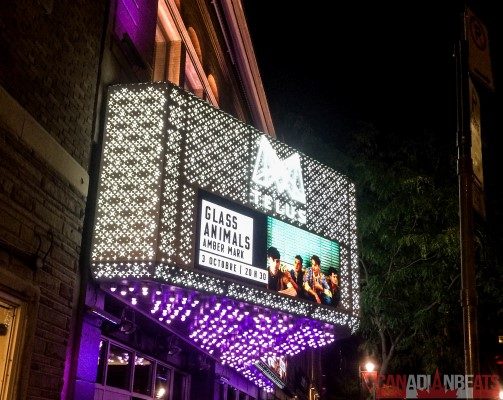 “People standing in line to look at premade sandwiches” an ominous, robotic voice spits out. Green lights are blinking at the audience and everyone knows what’s coming. Glass Animals, silhouetted against the green smoke, assume their positions as a loud cheer rises up from the audience.  “People standing in line and they don’t even know why” the mocking voice finishes. “Wassup Montreal!” Dave Bayley shouts and in an instant, everyone is bouncing along to the rhythmic drumbeats of “Life Itself”.

The stage is adorned with a palm tree, a TV box and the all glowing pineapple disco ball. Let it be clear that there is an abundance of pineapples at this gig. A flower-crowned individual holds the fruit above her head, whilst a plush pineapple crowd surfs its way to the stage. A booming cheer rises from the crowd as a real pineapple precedes the band and is ceremoniously placed atop the television.

Having set a promising mood and vibe for the rest of the evening, the band eases into the easygoing “Black Mambo” and mellow “Hazey”. Having held back its energy for the two songs, the audience launches into mad hysteria for “Poplar St.” and “The Other Side of Paradise”.

“My girl eats mayonnaise from a jar when she’s getting blazed” the audience shouts as Bayley turns the microphone towards them for “Season 2 Episode 3”. Members of the band keep the audience engaged by coming at the edge of the stage and hovering above them. The band switches between a multitude of instruments with such ease and finesse that one can’t even tell from where which sound is coming.

Although rather tame on the album, “Cane Shuga” is absolutely mad live. With flashing strobe lights and bouncing audience, vibrating ground and loudspeakers, it was difficult to comprehend whether one was at an indie rock concert or a drug-infused night at the club.

Last time Montreal saw Glass Animals was in the summer at Osheaga where their set was disrupted by rain. The audience made its enthusiasm and excitement for the band to be back evident. At numerous points during the night, Bayley thanked the audience profusely for its energy. The band exchanged astonished smiles amongst each other as the crowd shouted louder and louder cheers. “You guys are fucking kidding me right now”, a delighted and shocked Bayley tells the audience before jumping in to play “Youth”.

The excitement didn’t seem to wane from either the audience nor the band. The band definitely kept spirits up not only with their stupendous music but also with their infectious dance moves, guitar solos, bass solos and upbeat drumming.

By the time the band’s hit single, “Gooey” is played the entire room is quaking. Bayley is standing atop the barricade. The crowd’s enthusiasm is pretty clear. “Alright come close”, Bayley croons as he hovers over the audience, “let me show you everything I know”.  It almost looks like he’s going to be swallowed up by the audience. People take out their phones for a few pictures and videos and soon just get lost in the moment, passionately shouting “You just wanna knows those peanut butter vibes”.

The British rockers end their set with the cinematic “Agnes” from their second album, How To Be A Human Being. The giant pineapple disco ball throws a kaleidoscope of colours onto the spinning audience as they coo “You’re gone but you’re on my mind”.

The band thanked the audience for a wonderful night and exits the stage. The lights go down but no one is ready to leave. The crowd continues to cheer for a little longer but the band isn’t back on stage. The audience takes up a different tactic and starts stomping loudly. Soon the entire hall is vibrating from the sound of everyone’s eager feet; and without further adieu, the band is back on stage for “a couple of more songs”.

They lead an infectious singalong to a cover of Gnarls Barkley’s “Crazy” and give the people what they want with “Pork Soda”. The band leads a “clap-a-long”, with Bayley tapping The Pineapple, as the entire room bellows “Pineapples are in my head”, and reluctantly bring an end to the night.

Not only did Glass Animals perform, they put on a show. Their upbeat, psychedelic music kept everyone dancing and singing, but interactions with the audience made the gig more personal. Although the show wasn’t sold out, the audience members made up for it with their energy and enthusiasm, prompting Bayley to say “I think this has got to be the loudest crowd we’ve had”. His comment garnered an ear-piercing cheer. The indie rockers even tweeted about the insane night saying “MTL…that was mega”. The band certainly has a cult following of sorts here in Montreal, and are of course welcome to come back time and again for a pineapple party once more.