Review – In My Coma 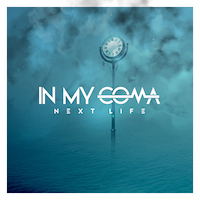 Toronto-based band, In My Coma, is releasing Next Life,  their sophomore album, today.  This emotionally-driven and dark album was produced by Mark Makoway (Moist) and is the follow-up to the delightful Magnets & Miracles.  I first discovered In My Coma at concert in 2015 when they opened up for Canadian rockers, Moist, and was instantly drawn into their beautifully layered songs.  Magnets & Miracles became the soundtrack for my road trips and for any time that I wanted to just escape into the music.  Having heard a few of the new songs from Next Life at recent shows, my appetite for the new album was growing rapidly.  Next Life is a near perfect sequel and demonstrates the sonic progression they have cultivated since the release of their debut album in 2011.

Their trademark sound settles somewhere between 90’s alternative rock and 80’s synth pop.  Next Life builds off of this framework but adds the lush elements of a richer guitar tone, darker synth sounds and more profound lyrics.  It is everything that a sophomore album should be!  I admire that In My Coma has not strayed from the sound that brought the band together, but rather have breathed life into it and allowed it to evolve and flourish.

Next Life features 10 tracks, including “Desperate Man”, which the band describes as a song that acts as a metaphor for life, careers, relationships and creativity in general, as it delivers the message of pushing through the barriers one may experience.  Also on the album in the single, “Take a Ride”, which was inspired by the mythology of the Sirens and imparts the duality of beauty and death together.  These songs are so much more than merely being riff-driven rock songs.  They are unexpectedly cerebral and really give me pause.

It was almost impossible to select my favourite musical moment on the album.  “Throw It All Away”  had a slight edge on the other tracks and had my interests peaked right away.  I could feel the collective contributions of the band’s four members most fully in this song.  Lead singer and guitar player Jasper James combined his appealing vocals with the distorted and aggressive guitar riffs to match Laura Doll’s driving bass lines and Mike Paterson’s upbeat tempo on the drums.  Lindz Clark’s melodies were arranged to give her more of an upfront presence in the song, highlighting her remarkable talent on the keys.  If you are going to preview the album, be sure to give “Throw It All Away” a play!

Next Life is an intensely slick demonstration of In My Coma’s incredible artistry.  This soaring musical statement also serves to ground and centre you as you take to exploring the deeper meaning of the often dichotomous lyrics.  Whether you need an excuse to kick back with some great music or an energizing life to get you moving, Next Life is an aural journey worth taking.