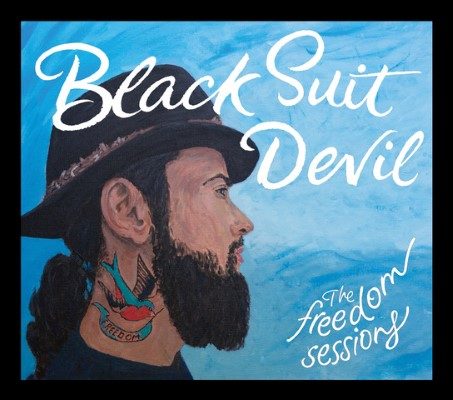 Hailing from the beaches of Toronto, Black Suit Devil has released his debut full-length record, The Freedom Sessions.  The mainly solo acoustic act- made up of singer, guitarist, and songwriter Andy Du Rego- takes the wildly popular singer-songwriter genre and, over the course of nine tracks, adds a layer of depth and creativity that surpasses even the most renowned in the respective scene. Black Suit Devi demonstrates his ambitious nature with a highly creative and original album that will solidify him as one of Toronto’s most prolific songwriters.

The album opens with “Blind Man” along with the crisp sounds of an acoustic guitar gracefully and tastefully indulging in a series of licks that are both filthily bluesy and Latin-inspired.  It is only a minute into this record that I realise that already this feels unprecedented in the singer-songwriter style.  For lack of better phrasing, I am blown away, not only for the clean nature in which Du Rego plays the guitar but for the depth of songwriting apparent in how seamlessly he has incorporated so many styles into an overarching folky tone.  “Blind Man” is further developed with the intense yet soft violin from Neil Cameron and the powerful backing harmonies- much in a style of Stevie Nicks- from Jules Cardoso (of Toronto’s The Road Heavy) who perfectly contrasts Du Rego’s gravelly vocals.  Beyond the fact that Du Rego showcases an impressive range of hauntingly raspy whispers- like heard on “Shackles”- to bellowing belts- as heard on “Dreams”- he captures a raw and unapologetic sense of emotion and soul with every word he sings.  This not only makes the music feel real, giving each lyrical narrative a sense of purpose and authenticity, but it gives The Freedom Sessions a live feeling, despite their polished studio finish; ultimately creating a greater sense of intimacy and excitement.

A number of the songs on The Freedom Sessions surpass the six-minute mark, yet there is not a single dull moment throughout the entire album.  To put this in perspective, full bands often struggle to keep lengthier songs entertaining, and while Black Suit Devil collaborates with others to create a strong vibe with different textures, the heart, and strongest element, of his debut is his unique voice as a songwriter.  “Bullet” is an excellent example of this as the song runs at a length of just under seven and a half minutes, yet the ragtime flair of the piano, the folky violin, and Du Rego’s vocals creates a strong contrasting series of elements that seem to fall into place with ease.  I cannot praise Du Rego enough for his songwriting capabilities and the risks taken by taking an experimental approach to a genre that is often applauded for its simplicity.