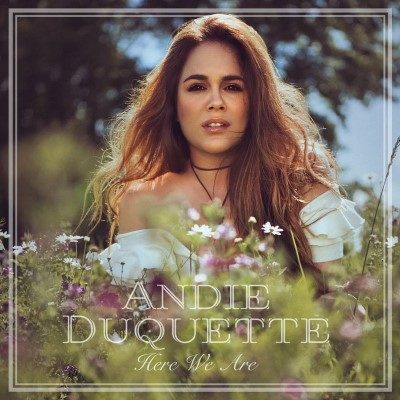 Andie Duquette has released her full-length country music debut. Available now, Here We Are celebrates a brand-new chapter in Duquette’s music career. After a successful run on Marc Dupré’s team in season one of La Voix, Duquette released the album Ton problème in 2015. “Wrong Wrong Wrong,” which was the debut single from Here We Are earned Duquette some instant country-cred and launched into the world of country music.

Despite her undeniable influence of rock and pop, Here We Are is a straight up album of country music with an edge. Duquette uses her passion for other genres of music to give the album a fresh, bad-ass, and strong female sound. Even featuring her own country-fied version of the Joan Jett anthem “I Hate Myself For Loving You” proves that Duquette can hack it as a country girl.

Duquette paired up with Tino Izzo (Céline Dion and Bobby Bazini) for Here We Are and the duo created some great country tunes. Duquette sounds fierce and edgy while coming off “country.” One by one, all 12 tracks of Here We Are are soul-baring, and musically captivating. You hear the power and the emotion that Duquette wants to share.

The album opens strong with “Lock Stock And Barrel.” Duquette is vocally gritty, and the tune is upbeat and sassy. “Lock Stock And Barrel” is catchy and you can’t help but be hooked from the first few guitar riffs. Next up “Nothin’ On Me” is the albums latest single and video. Duquette remarks that the track “directly calls out the cyber-bullies she has had to deal with” since the launch of her musical career.

“A Mom and Her Son” is a brilliant love song between a mother and her son. Duquette is vocally powerful and the song is very reminiscent of something Carrie Underwood-ish. “Wrong Wrong Wrong” was the album’s lead single and is another one of the fun songs on the album. I am a country boy at heart, but I love a good rock cover once in a while. Duquette kicked ass and cultivated her own version of the rock classic “I Hate Myself For Loving You.” Paying her respect to Jett, Duquette kept it classy but made sure it had a little country too.

“Stop Kicking My Heart Around,” “This Heart Of Mine,” “Show Me Now,” “Go All Night,” “Take What You Want,” “Get Out Of My Way,” and the album’s title track “Here We Are” round out the rest of the album. Coupled with some great ballads, and some heel kicking, boot-stomping good times Here We Are is a solid album. I have no complaints, Duquette slides into the country scene with ease and keeps her sassy rock edge. Duquette has created a strong country sound that could rival any current female artist.