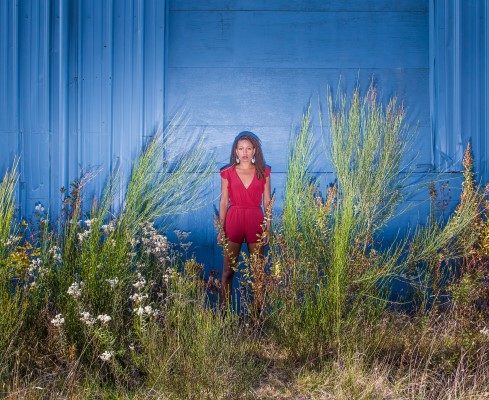 Vancouver based Ché Aimee Dorval will be releasing her new album, Between the Walls and the Window later this year. In advance, she is releasing a new single entitled “Buried” and here at Canadian Beats, we are excited to be hosting the premiere. When asked about the upcoming album, Dorval stated,

“The new album marks a moment in my life where I know who I am both personally and musically. Lyrics are important to me and I’ve found that instead of only writing about lost love and feelings of helplessness, I’ve started to comment on social issues that are important to me.  These songs have something to say.”

Take a listen to “Buried” below and take a moment to read our newest segment of Five Questions With to find out more about this powerful Canadian artist.

Oh hey! I’m Ché Aimee Dorval and I’m a singer/songwriter from Vancouver who is also one half of the ambient horror country act Casualties of Cool with my pal Devin Townsend. I’m about to release my 3rd album, Between The Walls and The Window, on December 8th!

My writing style has changed a lot since my last EP ‘Volume 1’. I think now it mostly falls into a sort of melancholic alternative rock thing with bits of folk and soul sprinkled here and there. It’s heavier than anything else I’ve released which probably has a lot to do with the company I keep these days. I think also, as I grow older and become more aware of the world around me, I’m feeling the need to speak up more musically. To make myself heard because finally, I know what to say.  Lately, I’ve been writing a lot about social issues that women are still facing today, things that I myself have come up against over the years but I’m trying hard to keep it strong, hopeful and honest.

I do have some shows coming up! I’m playing at Pat Dorval’s Radioactive Fundraiser on October 21st at the Gibsons Legion Hall in Gibsons, BC. Pat’s my uncle and he was just diagnosed with Esophageal cancer this summer. He is my heart and is the strongest most talented person I know so come on down and support him if you’re able! I’m also playing the Cobalt on November 19thwith another local band, Dream Cars, who are just so good.  And my official CD release show is in Vancouver at The Fox on Thursday, December 14th.

I have a large place in my heart for the song ‘Low’. It was actually the first song I wrote after a very long stint of writer’s block. It got me excited about writing for my solo project again and I think the subject matter is unfortunately all too relevant today. ‘Low’ is about my experience with sexual assault and it’s aftermath. All the hoops and the injustice, the stigma…it felt good to write, though. I just wish it didn’t have to be written.

I’ve always been a big fan of Emily Haines & The Soft Skeleton. She is such an amazing lyricist. Her songs are really great at quietly keeping you company. I’m in love with Frazey Ford. Everything she does, everything she stands for.  And Neko Case…always Neko case.