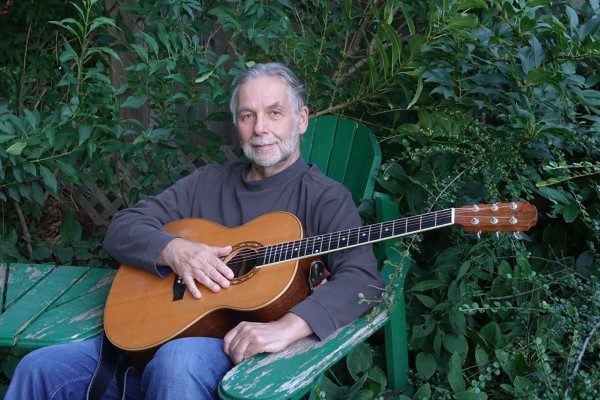 Toronto based singer-songwriter, Howard Gladstone will be releasing his fifth album, Hourglass on Thursday, October 5 at Hugh’s Room Live. We are happy that we had the chance to chat with Howard via this segment of Five Questions With. Be sure to check out the event page for his CD release show HERE.

I’m Howard Gladstone, a Toronto-based singer/songwriter.  I am just releasing my fifth album, Hourglass, after a hiatus of several years due to spinal cord injury that I have mostly overcome.    I have had a life-long interest in literature, and a background in journalism, and previously owned and operated a boutique manufacturing business in Toronto.  I’m still active in a smaller company I started in the audio industry.  But now I consider myself a full-time musician and have the time to concentrate on it.  I’m working with a partner to launch a new record label, Sonic Peach Music, with an emphasis on high-resolution music.

My music could be categorized as “contemporary folk”  in the tradition of the singer/songwriters of the 1960’s onwards, such as Leonard Cohen, Bob Dylan, Van Morrison.   I have both a poetic and lyrical style, as well as writing the occasional topical song.    I place a strong emphasis on lyrics and finding the right combination of melody and lyric to create the mood of the song.
To be successful in my opinion, a  song needs to create a mood, tell a story, paint a picture or express an emotion.  I bring diverse musical elements into my songs –  rock,  folk, blues, jazz, progressive pop – and try to create something new and unique in every song.   I feel if songs are to have lasting power, they need to rise above the ordinary and mundane and reveal something to the listener.   And do it with beauty, precision, and style.

My next show is Thursday, October 5 at Hugh’s Room Live in Toronto, to celebrate the release of my 5th album, Hourglass.  It is my most important and I feel my best work, released 3 1/2 years after I suffered a  spinal cord injury.  So it is a sort of comeback. For me, the theme of the evening is the power of music in healing.  On this album, and for the show, I will have  Laura Fernandez singing duets and backup,  guitar ace Tony Quarrington, and bassist Russ Boswell.  It will be an intimate and powerful evening – at least that’s the plan.

The opening track on my new album, Hourglass, is called “My Heart Won’t Let Me Keep Still.” It sets the tone for the album –  resolution in the face of difficulty, healing through the power of love.   It features the two acoustic guitars that pervade the album, and lovely vocal harmonies by Laura Fernandez    It can be heard on ReverbNation, SoundCloud, Bandcamp via links on my website.

I have great admiration for those performers who keep at it and am very impressed lately by Buffy Ste. Marie and Bruce Cockburn – two great creative wells of energy who continue to produce great work.  Jon Brooks is an amazing songwriter and raspy vocalist; but his tough subject matter probably means he won’t be mainstream, ever. Ariana Gillis is an amazing young singer/songwriter who has just released a new album.   I like the intimacy of the acoustic musician where one can hear deep into the soul of the music and the artist.