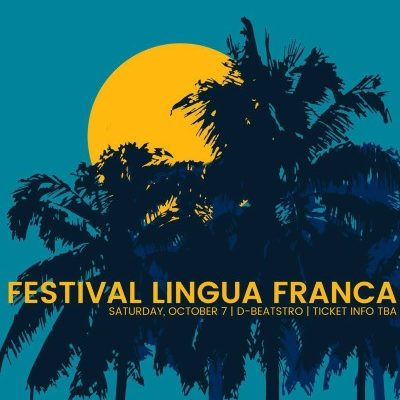 For anyone involved in the local Toronto music scene, it shouldn’t be a surprise that the city is teeming with diverse talent and that artists and audiences alike are thirsty for better representation, new sounds, and discovering the magic that their local artists can make. That’s where the new Festival Lingua Franca comes in with a lineup full of bands comprised of black and latinx members. We spoke to the festival promoter, Daniel G. Wilson about the importance of the upcoming fest and what music fans can expect.

You’re planning Festival Lingua Franca at D-Beatstro in Toronto on October 7. What was your motivation in planning this festival?

The short answer is that I had a dream one night. The long story is cooler. I often hear people talking about the lack of racially diverse bands there are on show bills in the local scene and thought It was strange.  Most of the bands I personally know have members from a range of racial and ethnic backgrounds, including the ones I play in. I felt like our presence was being ignored so I said, “f*ck it,” and started booking the fest. I wanted to highlight the black and latinx rock communities in the first instalment because we have been involved in rock music since its inception and found our contributions to the story of the genre post-Jimi Hendrix and Santana to be often overlooked in eyes of the non-music nerd.

Before beginning to plan the festival, what kind of experience did you have in live music programming?

I’ve been promoting concerts since early 2016 (not very long in hindsight).  The scene in my hometown was in the middle of a slow period and I booked a show in an attempt to remind everyone that stuff still happens here. It became a habit after that. I book shows in Mississauga, Oakville, Hamilton, and Toronto. I’ve never really cared about genre as long as the bands have a good energy and aren’t jerks.  This is the first festival I have booked though.  I think of it as a new experience to learn from.

How did your previous experience help you build this event?

It helped extensively. Since this wasn’t my first rodeo, I knew what to expect right out of the gate. Basic stuff like finding a venue, booking the bands, figuring out the gear share, and promoting the event comes naturally to me now.  I’m not gonna lie though, it’s still nerve-racking. Being prepared for everything is still an ongoing process as everything could mean a venue closes down last minute or a giant chicken crashes the show.

When choosing the lineup, what did you have in mind for the bands that would play?

I wanted bands that showed a range of attitudes and styles. I wanted to book bands that had a certain energy and enthusiasm about them that transcends genre and medium.

Why did you decide on D-Beatstro as a venue?

D-Beatstro is one of my favourite venues in Toronto. It’s a cool vegan restaurant (with really good fries) owned by punks that host all-ages shows. It is a pillar of the Toronto punk community and a chill hangout spot, I couldn’t think of a better place to host this event.

What is your biggest goal with this event?

Learning to fly (I’m kidding). Honestly, I just want people to realize that you don’t have to look far to find loud guitar-based bands that don’t fit the all-white stereotype that gets shoved down our throats constantly. It would also be nice if this somehow inspires more people of colour to pick up guitars and play rock n roll or just go to shows.  It would be cool if a month after the show I suddenly see a dozen bands pop up with members sprouting afros citing Thin Lizzy and at the drive as an influence.

What are your next steps? Could this become an annual festival?

Depends on how this instalment is received. If all goes well, I will put on the second one with the goal of extending the focus of the fest beyond just the black and latinx communities and incorporating all ethnic groups that have had to deal with colonialism or western imperialism at some point. I also hope to make this a three-day event. I will also be making Lingua Franca pies for the future event as well.

What can someone not familiar with the bands on the bill expect from the show?

Is there anything else you’d like to add for our readers?

For more information, and to get tickets head over to the festival’s Facebook page.