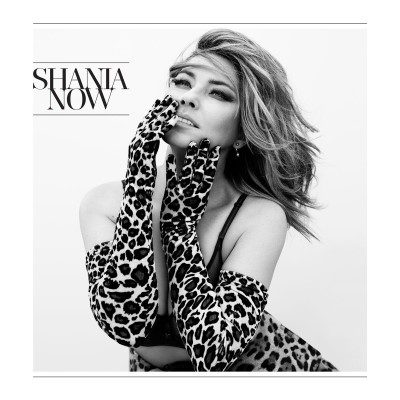 Love her or hate her; Shania Twain is back and we finally have that long-awaited and highly anticipated studio album just as she promised. Studio album number five is available everywhere and appropriately titled, Now. It is hard to believe that 15 years have passed since the release of 2002’s, Up! In 2004 Twain released the compilation album Greatest Hits. With time often comes growth; both as an artist and a human being Twain has undergone some major changes and creative shifts. Even though she hasn’t officially released any new music over the years, Twain has kept herself busy and continued to focus on her music.

From December 2012 to December 2014 Twain performed a total of 105 shows at The Colosseum at Caesars Palace in Las Vegas as part of her residency show, Shania: Still the One. Between June and October 2015 Twain performed 69 dates on her Rock This Country Tour. Proving that she is still one of the most sought-after performing artists in music, Twain finally graced us with new music when she made a major debut of the single “Life’s About to Get Good” in April 2017, at the famed Stagecoach Festival.

Released as the album’s lead single “Life’s About to Get Good” was a promise of good things to come. In August “Swingin’ with My Eyes Closed” was the second single to be released in support of the album. Both “Poor Me” and “We Got Something They Don’t” have been released as promotional tracks. Each release was well received, giving us snapshots and a tiny glimpse into what Now would be like. We “Now” have the glorious album in full and we can all rejoice as Shaina Twain fans worldwide will be spinning these tracks over and over again.

Twain went through a very public and bitter divorce in 2008. Drawing on real-life situations and personal experience is what makes an artist thrive. Twain tapped into everything she had to write each track onNow. The full-length album has 12 tracks and the deluxe version has 16, all penned by Twain. Each track has defined their own identity.Now is here to show that Twain is still as creative as ever. With eclectic musical elements and truthful lyrics, Twain enlisted some production help from some major and versatile producers; Ron Aniello (Gavin DeGraw, Bruce Springsteen, Barenaked Ladies), Jake Gosling (Ed Sheeran, Shawn Mendes, One Direction), Jacquire King (James Bay, Norah Jones, City and Colour), and Matthew Koma (Zedd).

The album opens with the latest single “Swingin’ with My Eyes Closed.” If you haven’t had the opportunity to catch this on the radio, you are introduced to the track and setting for the entire album. “Swingin’ with My Eyes Closed” is definitely a toe-tapper and fun. Opening with a perfect summer setting; “Summer’s here, bring it on /Another year, one more beer, another song / Comes on the radio so loud and clear / Your whisper comes in my ear” the track becomes one of the more anthemic songs on the album. The tune shows off Twain’s vocal skills from the “get-go.” There is no argument here that Twain’s voice has changed over the years, but make no mistake she still sounds great and her voice is undeniably iconic. Listening to Now, you know it is her and what you hear is purely Shania Twain.

If you ever listened to the international blue version of Up! you know that Twain can extend her music style anywhere. “Home Now” has subtle hints of that creative sound Twain likes to incorporate in her music. With musical elements of everything from Dublin to Mumbai, “Home Now” talks about finding your own place in the world. From songs centered on her divorce to moving on, and to finding love and happiness each track tackles a moment in time that Twain felt compelled to capture her feelings in the most artistic way. From the upbeat and danceable “Life’s About to Get Good” to the heart-wrenching “Because of You,” Twain tackles a broad range of topics and emotions on Now.

Twain has taken an appropriate amount of time to create and cultivate these tracks she has released into the world. They are testaments to the vast creativity Twain encompasses and prove that there is a reason she is one of the most successful females in the music industry.

In August 2017 Twain announced a brand new tour with over 50 dates. Set to embark on the Now tour in May 2018, tour dates are available and tickets are selling out fast to catch Twain perform her new music and some of her classic hits as well. Twain is also keeping busy with an acting role in the racing-themed film, Trading Paint. John Travolta stars in Trading Paint, which is about a former racing legend whose son joins a rival competitors racing team. Trading Paint is set to be released in 2018.

Now Official Track List:
“Swingin’ with My Eyes Closed”
“Home Now”
“Light of My Life”
“Poor Me”
“Who’s Gonna Be Your Girl”
“More Fun”
“I’m Alright”
“Roll Me on the River”
“We Got Something They Don’t”
“You Can’t Buy Love”
“Life’s About to Get Good”
“Soldier”