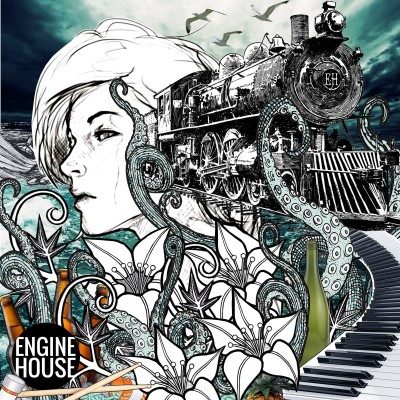 Picture this. You’re sitting in a lounge somewhere after a rough day wanting to unwind. The atmosphere is relaxing and some great music is playing causing you to move along and tap your feet to the rhythm. You wonder who could be the mastermind behind these unique, yet catchy beats. Two words: Engine House. This powerful duo from Thunder Bay, ON features Elle Kay on keys/vox and Harley Curley on drums/vox. Meeting only a few years back, the two became fast friends and collaborators and from this their debut album, EH, was born.

One of the first things that I noticed about this album was its simplicity. There were no over the top antics used to attract an audience; just simply a wonderful array of magical arrangements of keys and drums.  To complete each track a series of powerful vocal arrangements with a hint of blues inspiration were added to the mix. This is evident in the opening track, ‘Swimming’, as it begins with a soft melody to lure in the listener before bringing in more energetic, upbeat sounds to keep us intrigued. As the listener continues through the tracks to songs such as ‘Moonscape’ and ‘Sailor J’, they are sure to discover the melodies become more energetic and unique and make you want to dance.

The lyrics from these tracks seem to be inspired by many life events that the listener can relate to. From hearing of how things change in ‘Bound Train’ to various relationship scenarios in ‘Cryin Out’ and ‘Cool Cat’, each song is relatable. Then there are tracks such as ‘Waves’, where both the melody and lyrics of this track have a different vibe, almost adding an edgy feel to the song as the lyrics described the many faces a person can have (whether it be sweet, dark, mellow, or that of a partier).

Overall, EH, the debut album by Thunder Bay’s power duo Engine House is surely one not to disappoint.