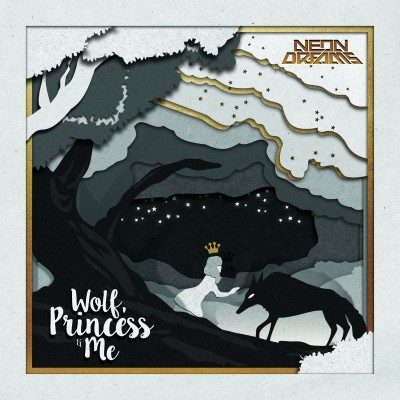 Neon Dreams have released their newest EP, “Wolf, Princess & Me”, with Frank Kadillac on vocals, Matt Gat on guitar and Adrian Morris on drums, bringing together their different styles of music. This EP has developed into an amazing compilation of exciting Pop/Rock and a totally 80’s dark sound.

With a lot of exciting achievements already under their belt, an even better opportunity has also landed in their laps for 2018, with a 32 date tour at most Canadian arenas with Hedley, starting on February 5th in Abbotsford BC. This will no doubt be an amazing tour.

Things are moving fast for Neon Dreams and this EP is just as fast as their musical skills. The first track sets it off, after the intro.

“Insane” is a favourite as it’s simply a song about telling their lover about the crazy insanity they have bestowed on them, and how they are going “Insane for you and is in flames for you”.

“Rescue”, which I hear is a personal track and favourite for Frank Kadillac is filled with so much diversity in the beat. As with other tracks on the album, it’s also a love story, which has so much greatness to it! Each band member has put something special into it to make it a great compilation track.

The track is also accompanied by an expertly produced video by Zac Facts, who has worked on videos with The Weekend, Tory Lanez, Belly, Future and Jessie Reyez.