Five Questions With Your Favorite Enemies 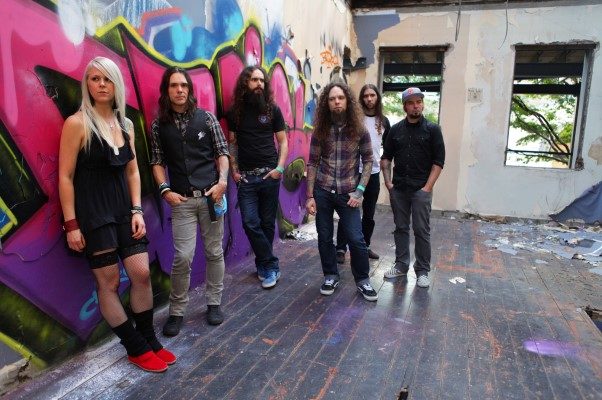 We are happy to catch up with Quebec’s Your Favorite Enemies for a chat during this segment of Five Questions With. The band released their new self-produced vinyl “A Journey Beyond Ourselves” with a book about their album “Between Illness and Migration” on September 1, and we’re happy to say that a review written by us has been included in the book! Although, the book has been sold out, there are still copies of the vinyl and more great merch available, so check out their website for info.

My name is Alex Henry Foster. I’m the lead singer for the post-rock band Your Favorite Enemies, which I formed almost ten years ago with 5 of my longtime friends.

We are located a little outside of Montreal, where we transformed a former Catholic church into our HQ. It is composed of a proper professional recording studio, a rehearsal space, a workplace for our multi-media and merch installations, and the offices of our record label. We are fierce DIY advocates, and every project we craft is based on a profound sense of community values and our involvement for human rights.

We’ve been described as a blend of post-rock/psych/noise/prog/alt-shoegaze and referred to as the illegitimate children of Nick Cave, Mars Volta, Fugazi, Mogwai and Sonic Youth, among others.

For us, I guess it’s a little more simple of an explanation: we’re an instinctive type of unit and don’t really care or worry about conventions and formats. We pretty much do what we feel like in the midst of moments we are sharing. We are more interested in the honesty by which we commune together than what should be shared and how it must be done in order to sound cool or fit other people’s expectations.

We don’t have any upcoming shows. We’re all converging towards Tangier for a few months to work on our next album.

But, for those who saw the band live, they might say that it’s some kind of a collective uplift and communal let go, that it’s pretty alive and filled with improvisation and swapped instruments, that it’s all about the moment and that nothing is forced. We never play the same “show” twice, and we don’t believe in the replication of emotions in the name of any particular type of entertainment. When it’s real, you don’t need to try to emulate whatever has worked before… as long as it’s real. For us, it’s what matters.

Oh, and you might leave the venue asking your friends if they think the singer will be alright, as it was a really high place to jump from. No need to say it’s getting harder and harder to find any good insurance coverage… and to play venues without a proper medical team on site 😉

“Underneath a Blooming Skylight” from our album “Tokyo Sessions”.

We all have different favourites, but the common ground would be any of those bands or artists: Metz, Neil Young, Godspeed You! Black Emperor, Feist, Preoccupations, Japandroids, Ought and Leonard Cohen.