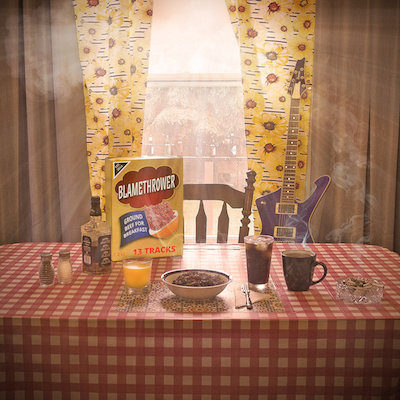 Ground Beef for Breakfast is the full-length album from Oshawa-based rock band, Blamethrower.  It has been in the works for years as members of this band created songs long before they attempted to make a serious crack at becoming an organized band.  The original band was composed of Johnny “Zero” Paty (lead vocals/guitar), Brandon E.M. Savage (drums/vocals), Brandon Smith (bass/vocals) and Kyle Homen (lead guitar/vocals) until the band faced the heartbreaking tragedy of losing a member of their own too soon.  After the tragic death of Homen, the focus of their debut album became one of tribute for their fallen brother.   The cleverly crafted album cover art hints at what the band remembers most about him – his love of all things rock ‘n’ roll and his unique quirk of cooking ground beef… for breakfast!  Adding CJ Keys as the new lead guitarist, the sonic landscape of the album began to take shape.

There is something for everyone when Ground Beef for Breakfast is served!  It touches on many genres yet still holds steadfast as a straight up, earnest rock ‘n’ roll statement.

“We’ve got a lot of influences, not just as a band but individually”, Savage describes.  “That really gives us a large palette with which to paint, and it’s why we feel that this is an album, and a band in general, that can appeal to a lot of people.  No matter who you are, there’s a really good chance that you’ll be able to feel a connection with our music.”

The album opens with one its finest musical statements, “Shades of Grey”.  The opening attack of pounding drums and aggressive guitar was an impressive way to start.  As Paty’s vocals, reminiscent of Bradley Nowell (Sublime) sang out it only served to wet my appetite for more of this strange breakfast food!

In a complete music genre shift, “Shades of Grey” transitioned into “Dead Town”, one of the most highly recognizable Blamethrower tunes, for fans that frequent their shows.  The opening bars of “Dead Town” had me scratching my head.  Was this country music I was hearing?  Very quickly I was reassured that it was still, in fact, a rock album when the sound quickly became more abrasive and enveloping with a more punk rock feel.  Blamethrower refer to their sound as being classically “dirty shwa”, and this song definitely gives the illusion of being about their hometown.  “Dead Town” makes reference to this “dirty old town” within its lyrics in a song that paints a picture of moving across country, only to return back and find it never changed.  Hot off the press, Blamethrower has just released a lyric video for this song in support of the release of Ground Beef for Breakfast.

The band displayed their softer side with “Beautiful”, a heady, downtempo song compared to the sweaty rock songs surrounding it.  I found myself wanting to return to this song after listening to the entire album to take it in again.  Perhaps it was because my love of Incubus was honoured with this song; a song that could easily be taken from their playbook.  However, it certainly has lasting appeal and one hell of a guitar solo!

“Home and Heartbreak” is another heartwarming tribute to Homen.  Say the name of the song out loud… do it!  Even its name is a play on Kyle’s namesake.  This song came together very quickly as the band yearned for a way to pay their respects in the most appropriate way they knew how – with music.  This tune was released as the album’s first single and features an official lyric video that can be seen on Blamethrower’s YouTube channel.  In my recent interview with the band at their hometown venue, The Moustache Club, Paty talks about the significance of this song in a rather emotionally-charged moment from our chat.

Ground Beef for Breakfast includes one cover song, “Catholic School Girls Rule” (Red Hot Chili Peppers).  I am unsure about my feelings for their decision to include this song on the album.  In my opinion, as the only cover, it really fails to accurately represent the band’s unique sound.  The gang vocals in the chorus could also use some polishing up.  Perhaps I am missing the point with this selection but I know I have heard this band play some amazing covers at their shows!

The pinnacle of the album is the song, “Broken Finger”.  Every element seems to fuse harmoniously with this delicious track.  From the sweet bass lines from Smith that really soar in this song and play a much more important role than just a supporting rhythm, to the intricate drum patterns from Savage, there is not a negative thing I could say.  Paty leaves himself completely exposed in this song with his pared-back, vulnerable vocals.  “Broken Finger” is risque but not in any fancy capacity.  Rather, with lines like “I wanna fuck” it is organic and primal.  Ironically this song has the most radio appeal despite its graphic content.  My wish for future Blamethrower music is for it to take shape from this masterful musical statement.

Savage sums up the band’s efforts on their debut attempt,
“This album represents a lot of hard work and passion, not just from the four of us, but from our team, our friends and our families.  We’re really proud of what we’re putting out, and we think it’s going to turn a lot of heads.”

The eclectic collection of songs on Ground Beef for Breakfast initially seemed as odd of a choice as intentionally choosing to eat such an nontraditional breakfast food.  But it would be insulting to think that Blamethrower didn’t put much thought into their album.  The truth is, as you dig deeper and listen further, this complicated project begins to expose its’ many layers.  When all of the puzzle pieces fit together seamlessly, the resulting product is bound to get noticed.

Get out and see what the hype is about.  The official album release show is happening at The Moustache Club in Oshawa TONIGHT!  Check out the Facebook event for more details.  You can also stream Ground Beef for Breakfast on Spotify, now!