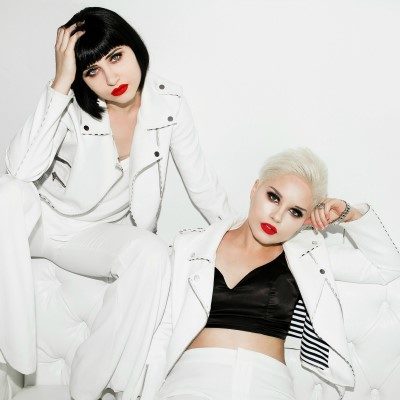 We recently had a chat with Sarah and Charlotte of The Command Sisters. The pop duo has released their debut single, “Low Profile” which was written by themselves and produced by The Disco Fries. Find out more about the sisters, their single and much more in our interview with them now. Check out the single HERE.

We’re the Command Sisters: a singing and songwriting pop duo based out of Toronto.

(Most FAQ: Yes our last name is Command and we are sisters, haha!)

How would you describe your sound to someone who has never heard your music?

Once you release your single, what does the rest of 2017 look like for you?

“Low Profile” is the beginning of a new life for Command Sisters! It’s been 10 years in the making, writing and touring together. We’re happy to say that we’ve discovered our sound and who we are as people within that decade, and this single is the first step in the new journey. We’ll be releasing our second single in new year, followed by our debut EP. Ahh!

Do you have any upcoming shows that you’d like to tell us about?

Growing up together playing music, we have toured across Canada, the States, and China! With the release of our album early 2018, we plan to hit the road again to bring our new sound to the stage! We’ll be sharing our future tour schedule on our social media platforms: @commandsisters

While following your social media profiles, it’s easy to see that you both have a stellar sense of style, is there one specific item of clothing (or an accessory) that you can’t go without?

A giant bag from Fossil! Fits all of my extra guitar pics, MAC lipsticks, and sunglasses that I can’t live without!

I love songwriting because the inspiration is so fluid for me; it can come from anything and anywhere, and it always surprises me. As any songwriter, I like using my own personal experiences; being inspired by my own dreams a lot of the time. I also get inspired by other people’s stories, things I hear in the news, bits from books or television shows, etc. Once I have that spark of, “Oh, you GOTTA write about this” it doesn’t leave me. In fact, until I DO write that song, I feel restless and agitated, like I’m on a mission and I can’t stop until it’s completed.

You are about to release your debut single, “Low Profile” on September 8, what can you tell us about the single?

I wrote this song about a dream I had. Initially, it was written as a ballad, however, in our heads, we kept hearing this dance/funk beat. The Disco Fries captured that vibe perfectly! This song is important to us because it marks our transition from country to pop music.

You worked with The Disco Fries on the single, what was that experience like?

Working with the Disco Fries was a really cool new experience for us. We got connected with them online as they’re from New York and, at the time, we were living in Edmonton. We recorded the vocals to “Low Profile” in our closet (haha) and they produced it all the way in NY!

While following your social media profiles, it’s easy to see that you both have a stellar sense of style, is there one specific item of clothing (or an accessory) that you can’t go without?

For me, one of my favourite must-have pieces of clothing is a pair of high waisted trousers and a cool jacket. Nothing beats a great pair of stylish pants; they’re so versatile, and you can literally pair any crop top with it!  And, of course, a sick studded leather jacket completes ANY outfit.

With summer coming quickly to an end, what is your favourite activity to take part in during the summer months?

As a person who has lived most of her life in Alberta and is used to nine month winters, once the nice weather rolls around, I just like to lay out in the sun and do “nothing”. Haha.

Here at Canadian Beats, we’re all about the “hard” questions, so let’s say you could only choose FIVE other Canadian bands/ artists to make up a festival line-up, which five would you choose?

There are SO many stellar Canadian artists to pick from, so this is going to be a tough question! We’d have to say:

It always blows our minds that people want to spend their time supporting artists and their creative endeavours. We’re thankful that we’ve gotten to know an awesome group of followers that have waited so long for our first official music release. This is the first song of many to come and we hope you will dance along with us