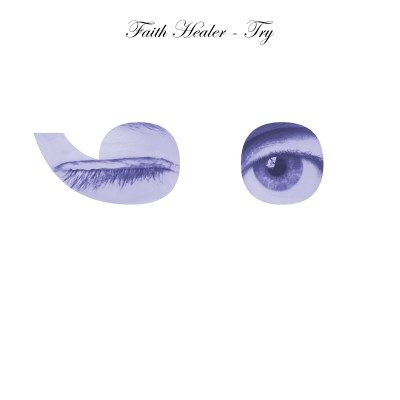 I have been listening to Faith Healer’s album Try ;) for a week and I’m still trying to figure out how to describe it. Jessica Jalbert and Renny Wilson produce something that is nuanced, and full of a variety of different sounds that layer together beautifully. It’s mellow but not dispiriting – swirling psychedelic organ in some songs (“Light of Loving”), reminiscent of Jefferson Airplane and the Doors, and stripped down, melancholic, and playful in others (“Sterling Silver”) that remind me of Bon Iver if he took uppers. You’d think that these styles wouldn’t go together as well as they do and you’d think that maybe I’d describe it rather well, right? But it’s not enough.

This is Jalbert’s sophomore album as Faith Healer but her first with drummer/multi-instrumentalist Wilson with whom the chemistry is tangible. They have crafted a thoughtful record “with plainspoken lyrics that thoughtfully reflect on self-empowerment, depression, and appreciating the good in life.”

I enjoyed the tactile nature of this compilation, how it felt I was listening to an old record from the 70’s from the bargain bin while at the same time feeling fresh and new. Jalbert’s vocals get under your skin like an itch; enticing and soothing, intriguing and relaxing. Wilson’s nostalgia-laced instrumentals are at the same time engaging and soothing. The album is a straight up dichotomy and it’s straight up enjoyable.

So, for lack of anything else to say I will simply say this: Faith Healer’s new album Try 😉 is lovely.

I think you’ll dig it.