Interview – The Lucky Ones 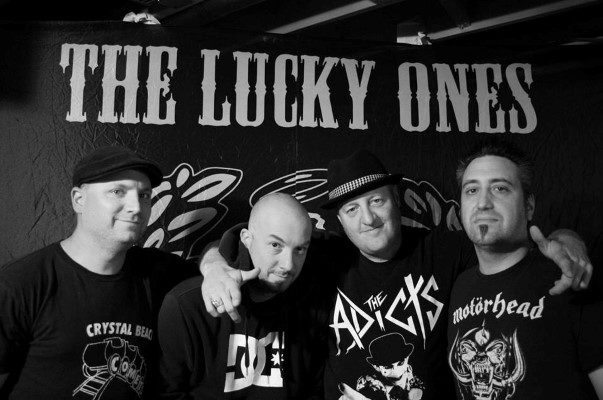 St. Catharines-based punk band, The Lucky Ones, are out on the roads of Ontario in support of their latest album, Better Late Than Never.  We had the chance to catch up with lead singer, Steve Stumble, to chat about the album, which is coming out five years after their last release.  A lot can happen in five years to change a band and we could not agree more that this album is ‘better late than never’!

It has been five years since the release of your last album.  The members of your band have experienced a lot of life in these five years.  How has this affected your music compared to your previous releases?

Yep, 5 long years…Actually, it’s gone by pretty fast!… I wouldn’t say so much that it has affected the music, so much as its just limited our time to be able to get together and write as much music as we would like to.

Better Late Than Never was released on September 1st via Stumble Records.  What has been the reaction to your album so far?

I think the response has been pretty good so far… I think a lot of people are actually surprised that we’re back. The record debuted at #83 on The German Itunes top 200 Alternative Records so it can’t be doing all that bad! We’ve never even been to Germany… But hey, they even like David Hasselhoff there. Hahaha

Punk music is about the live music experience.  How do your songs play out differently in studio compared to performing them to an audience?

Actually, for the most part, they sound pretty much the same… But there are a few exceptions on this record compared to the records in the past.  We actually can’t play the songs we did with Shohei from Samurai Attack live cause we did them with two guitar players. Live we only play with one… Shohei played the drums so we moved our drummer Eric to second guitar on those tracks… We did rework the song “Shout!” so we’re able to play it live for the release shows though.

Do you prefer a small, intimate venue or a large stage for a concert?

I would definitely rather play a small 100-150 person packed than a 400-500 person room with 100-1500 people in it…Makes for a better atmosphere… Though I do love playing at outdoor festivals. I couldn’t care a less about how many people are at those… 50,000 or 50 it’s always just great to be playing outside. We played on St. Paul Street in St. Catharines in the middle of winter when it was -20 outside and it was awesome!…

What does the rest of 2017 look like for The Lucky Ones?

Well, we’re doing a bunch of Ontario dates..St. Catharines, Hamilton, Toronto, Barrie, Guelph, Burlington… We’re also hoping to hit London, Windsor and Ottawa, Montreal and Kitchener as well…We might hit some small towns for some random dates over the winter also…Next year we plan on hitting out west so we’ll see if that happens or not??….

What do you do for fun when you are not working on music?

Ohhh hmm, well I’ve been restoring a 1964 Vespa Allstate… If I could only figure out what the hell I’m doing!!!!.. lol… I like to hit some of the Scooter Rallies also… I hit the rallies in Port Burwell and Buffalo this summer… If I had more time and my scooter was finally running I’d probably hit up some more.

What are your thoughts on the importance of social media in the current Canadian music industry?

Well, I’m guessing it’s pretty important!. I’m just an old bastard and like a physical product in my hand but the reality is that only works if you’re on the road a lot. People seem to listen and buy and stream everything online these days… So we try to keep with the times but me and technology don’t get along but I’m learning!…

What are the three must-have items you would take with you while on tour?

2. Socks…You can never have enough clean socks on tour either!… 3. Toothbrush… You don’t want to have bad teeth on the road!..I’ve heard horror stories about people not taking care of their teeth on the road!…Plus you’ll need to get rid of the stench of the night before from your mouth…

3. Toothbrush… You don’t want to have bad teeth on the road!..I’ve heard horror stories about people not taking care of their teeth on the road!…Plus you’ll need to get rid of the stench of the night before from your mouth…

What three words best describe The Lucky Ones?