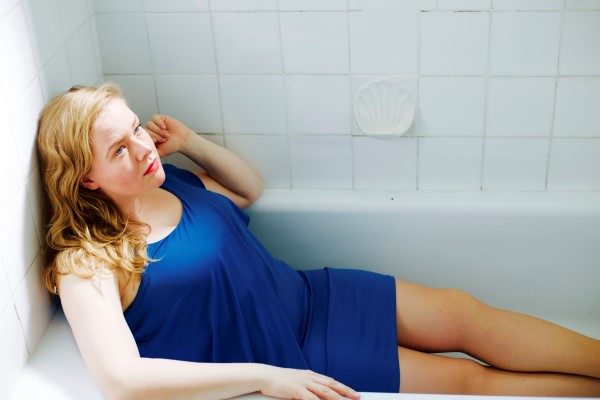 We had the chance to chat with Edmonton’s own, Lindsey Walker for our newest segment of Five Questions With! Stay tuned for her new album, this desolate bliss coming out on October 20. It is not to be missed!

Oh hello there! My name is Lindsey Walker, and I am a musician based out of Edmonton, Alberta by way of Winnipeg, Manitoba. I create music in the ‘cinematic-apocalyptic-roots-rock’ genre. (That’s a genre I have created to better explain my music sonically). I write dark lyrics, but I am actually a very funny person in real life – promise. I am releasing my second studio album in October, and I am very excited for that.

My music style has shifted over the past few years, but lately, I feel I have really dialed in my sound. It’s under the umbrella of roots music, but it also includes rock, soul, blues and jazz elements. I grew up singing musical theatre, then once I was 18 I started hanging out at blues bars, where I gathered up the courage to sing with their house band one night. Since then I have toured across Canada with various projects and am now focusing more on my own music. As for my writing style, I enjoy writing about the darker sides of life – whether that is my own life or the lives of others. Even in my ‘happy’ songs I always seem to refer to something on the darker side …

I sure do! I am releasing my album ‘this desolate bliss.’ October 20th in Edmonton at the Royal Alberta Museum Theatre. I am also playing in Saskatoon (with my band!) October 27th opening up for the incredible Jen Lane as well as the super rad Apollo Suns. That show is at the Capitol Music Club. November and December I am laying low for a bit, then in January I am touring the prairies (driving through the prairie provinces in WINTER?!?! I must be insane…), I’ll be heading out to the west coast in March, and our to Ontario and Quebec in April. Those dates will be posted soon.

My live performance has been described as ‘watching a sensual performer relive all her past heartbreaks live while joking about it along the way’. I don’t think I ever set out to do that consciously, but I really do get emotionally involved every time I perform. I also really enjoy telling hilariously embarrassing stories about myself in between songs, so it definitely is a spectrum of emotions that will be experienced.

That’s like asking me to pick one of my favourite children! But since I don’t have any children, the choice is relatively easy. I would say, check out “In Your Light“ off my upcoming album ‘this desolate bliss.’ It’s dark and brooding and creepy. While also being heartfelt. Creepy and heartfelt. Maybe I should make that into a bumper sticker.

Ooooo! What a great question! I am a huge fan of CanCon (Canadian Content). If I have to narrow it down, I will list these artists to check out:

Andy Shauf – his latest album ‘The Party’ is one of the best albums I have heard in some time. From Saskatchewan.

Royal Canoe – I love everything these guys do. It’s very different from a lot of my music on my iPod. There is a lot of detail in what they do and how they do it. Their latest video for their song “Walk Out On The Water” is tremendous.

The Bros. Landreth – I actually went to grade school in Winnipeg with the brothers, and it is incredible to see what they are up to now. Their vocals are so smooth, and the guitar playing by Joey is out of this world. Mix that in with great songwriting, and you have an album that gets constant play at my house.

The Barr Brothers – their new album is killer.

Oh my goodness, I could keep going but I will just end by listing some amazing Alberta musicians that are doing some exceptionally rad things: VISSIA, Nuela Charles, Mariel Buckley, Jay Gilday, Jesse and The Dandelions, Jordan Norman, and SO MANY more that deserve all the love in the world.