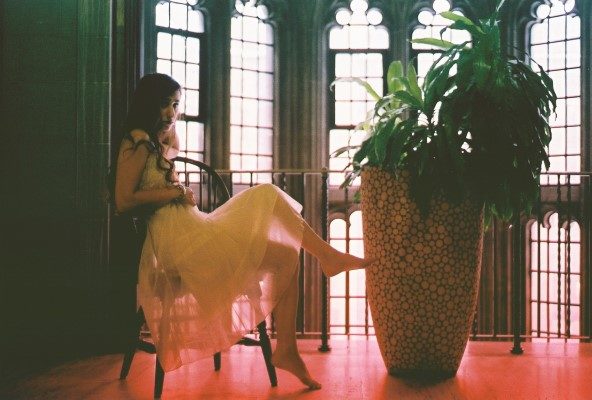 Toronto’s favourite songstress, STACEY, released her sophomore EP First Move on September 15th and is gearing up for the EP release show at the Drake Underground in Toronto this week. We caught up with her in a cute diner to discuss the new music, her journey as a songwriter, and what she plans to do with six dozen roses. Make sure you check out the EP and grab tickets to the release show September 20th here.

First Move, the follow-up to your self-titled debut EP released on September 15. I’m sure this is a culmination of years of dedication and hard work. How does it feel to have it all ready and release it out to the world?

It’s really exciting, honestly, it’s kinda surreal. I don’t really know how to feel about it because it’s as simple as, all of a sudden it’s available everywhere on the internet and then it’s done. You know, it’s like two years of working towards something and then the day is here and you’re just kinda like, “huh, cool!” I didn’t really have any plans for the release, and my friends wanted to go for dinner and I figured, oh yeah we should celebrate, but I mean nothing really happens tangibly other than it goes live on the internet so it’s kinda bizarre, to be honest. I’m excited for people to hear it.

You released some singles here and there leading up to the EP release including “It’ll Be Alright,” which you wrote in California. Can you tell us a little bit about that trip?

I went to California a couple years ago. I was kinda going through a bit of a hard time and I just needed a spontaneous trip. I took my keyboard there and had a beautiful Air BnB and I just wrote and it really came through as a song of comfort for myself. It was serving as kind of like a hug to the listener. And I was trying to write it from the perspective of – you know it sounds like me saying it’ll be alright to someone else – but when I was writing, it was more so me saying it to myself.

I came to the table with a lot more references this time around and really a stronger idea of where I wanted to take things and it was really an evolution of myself as an artist while maintaining the same elements that I used in the beginning. It’s still very much centered around the vocals and the piano, but I just wanted to grow it. I wanted to get away from playing the piano at live shows. I wanted to put a band together and have it be a little more big and bombastic in order to really create a journey on the album, but also for the live show, and with that, you have to add more elements than just piano. I love the piano so much, but it was just time to build it for the EP.

I’ve noticed from some of the songs you released, you still have some of those intense, emotional moments. You’ve said before that you want to embrace being emotional and not be afraid of it, so how do you so confidently embrace that vulnerability in your music?

You know what’s crazy is that when I’m writing, no one can be around. They’re such personal moments and they are feelings that I struggle to talk about naturally so it really is an outlet for me, but it is ironic to let it shine and draw so much attention to it in a song format.

Do you ever feel that way when you’re performing it live?

I’m just in the moment but it can also be scary. I get nervous, sometimes I think about who is in the audience and I don’t want family or friends to worry about me. But sometimes when I’m performing I feel like I know there are a few people in the crowd that need to hear those things. After every single show at least one person comes up to me and says, “I really felt this emotion, I really needed to hear this and I feel better as a result of you singing that.” So it helps me power through because this is the right thing to do. That’s what I take away from music and I hope to provide for others.

So the EP was produced by Derek Hoffman (Ralph / The Elwins) and Alan Day (Four Year Strong) after Alan found you singing on Instagram. Can you tell us a little bit about that encounter and what it was like to work with them?

I had been searching for a new producer for about a year and I made the EP and scrapped it and I was quite depressed. I had all these songs and I didn’t know how to move forward. I felt lost because I’m not a producer. I’m a singer, songwriter, an artist but I’m not a producer. And I needed someone to jump on board that understood me and my vision. I was searching for so long, and then I got this message from Alan and I was aware of his band, and you know his band is awesome but it’s in a totally different genre than mine. And I wasn’t 100% sure that it would work, but I was willing to give it a try. So he was kind enough to offer a free day in the studio just to have a go at it and then go from there – no pressure. We worked on the song “First Move” in that session and it’s as it is today on the EP. It came out in a day and I remember listening to it that night and thinking, “this is what I’ve been searching for.” They really understood me and where I was coming from and they were able to pull out my references and make it something different and unique, but still be authentic and true to me. They were just spectacular to work with, they were so kind and true facilitators of getting the artist’s creative vision out and executed.

Did you have the same kind of journey with each song on the EP where it started off one way and ended up with the final product?

Yeah, most of them were pretty straightforward. We struggled with “It’ll Be Alright.” I came back to it a few times. The way that it is today, it sticks out, it’s a little bit more upbeat. It’s more hopeful. There isn’t really a romantic theme behind it,  so when we did that song after “First Move,” I was so scared of it because it was so upbeat and I just thought that it needed to be darker or something more mellow. So we did another version of it where they toned everything down and it was more piano based and dreamy and it blended in more with the other songs. But I got to a point where I was comparing the two and I realized it did a disservice to the song so I kept the original version which is the version that’s out now. All the songs on the EP are kind of downtempo so I think it was a strong choice to proceed with a little extra flavour.

Is there a song on the EP that you’re most excited to perform at the release show?

I love playing them all. It changes every day in this moment, I’m excited to play “Daydreaming” because it wasn’t a single so no one’s really heard it and it’s very sing songy, it’s very swaying-in-the-kitchen.

What can we expect from the live show? There’s going to be a full band now, so what do you think will be the most memorable takeaway?

Well, I have acquired six dozen roses that I have big plans for and that’s all I’m going to say for now. It’s going to be very romantic.

Speaking of the EP release show, you’re going to be giving out 2GB USBs with music, photos, and little personal notes on each. How did you come up with the idea to release all of that content on a USB and how did you go about making sure each one was personalized?

I think that the personalized note is essential because it’s something that goes beyond the physical. It’s something that is personal to you and you’re like, this is the poem or the personal note that I received and it’s mine and only mine. I think that parallels with a lot of the fashion elements that I like because I like to go with one of a kind things. And I had good reactions to using USBs in the past. For an independent artist, it didn’t make sense to me to do a vinyl run, it’s just so expensive for 5 songs. So now, for anyone that wants to buy something at the very least they get a 2GB USB.

Speaking of the one of a kind style, you clearly gear towards the vintage but classic imagery and that’s present in all your photos and music videos. How do you balance that image with going to a more modern sound on the EP?

I try to use chord progressions that are classic and not going too crazy with modern production elements. I like keeping that organic sound but ultimately making sure that it stands out to today’s standards and that it’s good production quality so that it doesn’t sound dated. It is something that I do try to keep in mind because it’s an important balance for sure.

You recently had your TV debut, and that’s kind of a milestone to play on a morning show. How does it feel to hit that milestone?

It was pretty surreal, you know there’s a lot of build up. You’re practicing, you get all the gear there, you play one song and you teardown, so it was over in a flash. But I did settle into the moment and enjoy it and I had a blast. It feels so exciting and self-actualizing as an artist because it’s a good opportunity and it’s something that people can recognize. You know, it’s a stamp of a certain tier of quality and that’s important to me as a musician, to be able to progress. There are different milestones that you can grab at in your career and that is certainly a big one to have your family at home paying attention, it was so special.