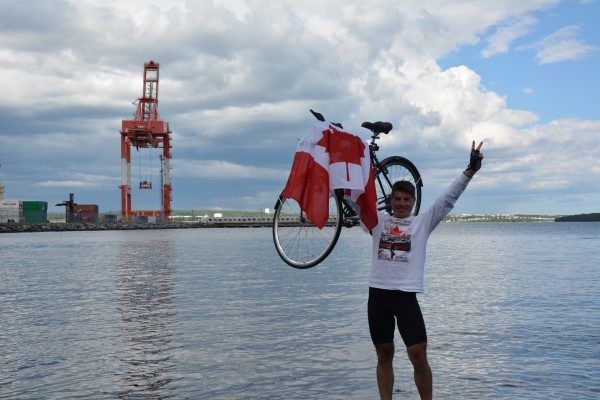 Italian Canadian artist, Antonio Piretti TOZ took some time out of his schedule while on tour in Italy to chat with us about his latest Canadian tour, “From the Roots in the Right Direction”. The unique thing about the tour was it was done all on a bicycle. Find out more about his journey now. Enjoy!

Music is my way to connect with the universe and through my songs, I want to share messages that make people think, reflect and motivate them to do better.  I am not only a songwriter living between the North American and the European world, I am also a soul’s fighter that constantly likes to challenge itself. The cycling-music tour “From the Roots in the Right Direction” has been my last of those challenges until now.

Everything began in 2005 when I changed my life. I had it all, the perfect business career: well-paid jobs and I had founded my own company.

At one point in time, I couldn’t see a reason anymore in running behind the big money and I was looking for a more profound meaning in my life. I found meaning, passion & love for music. In 2005 I started the journey learning guitar and beginning writing my own songs. In 2009 I set off to Canada to face my challenge to live only with my passion, the music. I have chosen Canada since the people are really open-minded in regards to music and are giving new musicians a chance. I got my chance when I went to the audition for the TTC license (Toronto Subway). Out of hundreds of applicants, I received one of 75 licenses issued by the TTC. The following years I could live with my music playing an average of five hours in the subway every day. From that time until now I could develop my musical career continuously. I recorded three albums and played countless gigs in venues in Canada, US, and Europe.

Since my wife Maybritt and I have always strived to give back and to contribute to creating a better society, we have founded a charity organization Art Takes Action for Charity. ATAfC’s mission is to further art with positive messages. We organize art events in which we put together artists of all disciplines to raise funds for charitable causes. Meaningful art for meaningful causes.

2015, I did my first tour from coast to coast across Canada. I introduced a new show concept songs & videos in numerous gigs in the main Canadian cities along the way. 2016 I toured across nine countries in Europe.  Always, now and then, sharing music and playing on the streets, where it all began. This year I faced my biggest challenge so far – at least physically – a music tour by bicycle across Canada.

You recently did something very unique. You rode your bike across the country for a tour, what made you choose to do this?

I love to challenge myself and besides the music, sports are my other great passion. In this tour “From the Roots in the Right Direction” I have connected music and sport with a cause. I chose to ride the bike across Canada to get back to the roots and seek for a human natural pace. Technology, software, and social media have become so fast and sometimes impersonal. Cycling gave me the opportunity to meet people for the country’s 150th anniversary in a natural way and pace. Furthermore, the tour has been the kick-off of the operations of our charity Art Takes Action for Charity and we organized three art events in Vancouver, Toronto, and Halifax.

You were raising funds for various charities through this tour; can you tell us more about that?

We founded Art Takes Action for Charity in 2014. It is a registered private foundation with the mission to advance the public’s appreciation of meaningful arts by producing performances and works of artistic nature in public places and arts festivals for charitable causes. On these three events across the country we have raised money for Doctors Without Borders, Save the Children and Amnesty International.

Did you get a chance to explore each stop on the tour, if so, what were a few of the attractions you took in?

My schedule was pretty tight. I woke up in the morning to bike an average of 140 km each day. At the end of each week I had two days off and on one of these days, I had a gig. Many times when I stopped biking for the day, I was tired and I needed to not only rest but to keep things done such as to update my tour diary and so on.

Already during the tour of 2015 my wife and I had discovered a magical spot in Ontario to which we have returned also this year twice: Batchawana Bay. It is an amazing Bay of the Lake Superior and somehow special to us. It lies on the way from Wawa to Sault Ste. Marie – one of the most beautiful rides ever. Of course, the Rocky Mountains have fascinated me. They are a sign of nature’s power. In general, you start to appreciate nature’s force even more, when you have to face all kinds of weathers and landscapes.

But at the end, such a trip is all about the people you meet along the way. I am grateful for every kind of help, words, advice, and hospitality of my fellow Canadians. If anyone is interested in learning more about my experiences along the way, it’s in my diary on my website (check the dates of the tour – from April 27 to July 6, 2017).

I have experienced, explored, learned and taken in so much along this ride that telling all of this would become an epic essay, but I can recall these special spots for us: Sioux Narrows, Lake of the Woods & Lake Louise, the world’s largest Teepee in Medicine Hat, The Terry Fox memorial in Thunder Bay, beautiful villages in Quebec  and the beautiful Pleasant Point Park in Halifax.. It really has been an experience of a lifetime!

You completed 13 shows across Canada, what was the highlight of the tour?

The highlight of the tour has been the arrival in Halifax! Knowing that you have won your challenge and finishing this off at the shores of the amazingly beautiful Point Pleasant Park has been an everlasting memory. 6,034 km by bike through odds & obstacles but also amazing sunsets & landscapes along the way. While you bike, listening to your breath you feel the vibes of the energy which you are moving in and which you are part of.

Would you consider doing this again in the future?

Sure  😉
it’s in my nature to keep on going and so I am already thinking about next adventures for the future.

For anyone that missed these shows, when can we expect to see you on tour again?

Right now I am on tour in Italy. By the way, it’s always worth to take a flight to spending some holidays here and to listen to some good tunes 😉 I’ll be back on tour in North America & Canada quite soon… a step at a time…

I have written some new songs over the last year and in December I am going to record them. The winter I’ll spend with learning piano, experimenting with my music and drinking tea. But  I’ll never stop touring, so stay tuned and keep yourself updated on my social pages.