The hall was jam-packed for this tribute show honouring Canadian country hits of the past and present performed by Canadian country music icons and today’s brightest stars that are just starting their musical journey. Cal Gratton from Today Best Country 105 CJVR and singer-songwriter (and a Canadian icon) Deric Ruttan hosted the show.

The show was over two hours long and that wasn’t long enough. The Hunter Brothers opened the show with “My Brother and Me “ by the Johner Brothers. Partway through, Hall of Fame Inductee Paul Brandt joined them on stage. These brothers were so excited and it made for a very special moment to have Mr. Brandt share the stage with them. 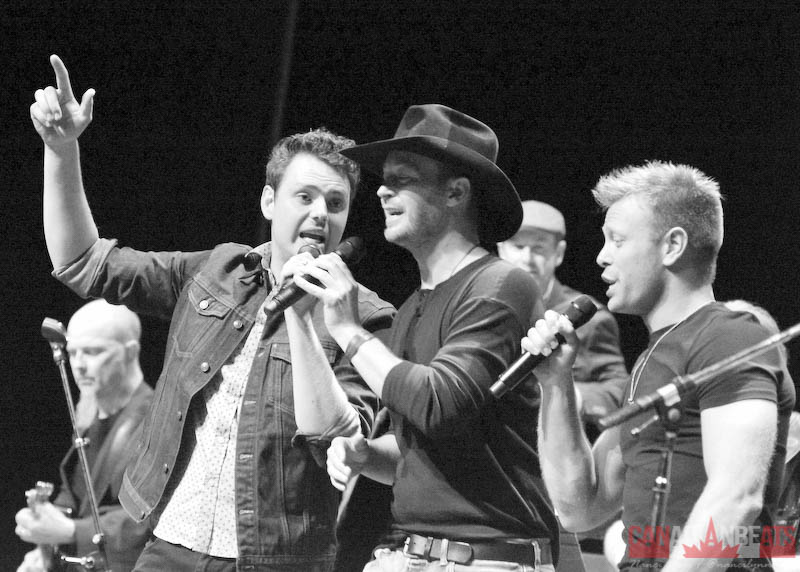 The Hunter Brothers continued on to perform their hit single, “Long Way to Love You” to the crowd clapping the whole way through. They soar with their harmonies. After the performance, up the in top balcony, a group of fans dropped a lighted banner that said, “We LOVE the Hunter Brothers.” What a great accolade it was for the home province brothers. 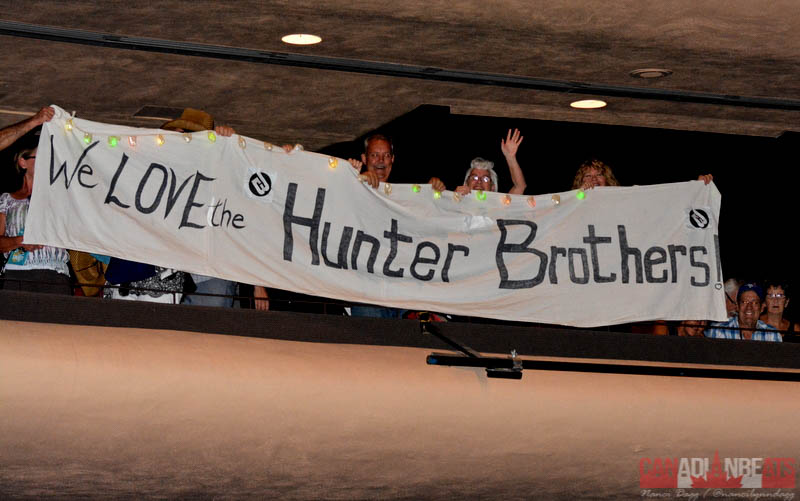 Cal Gratton and Deric Ruttan were excellent hosts. They amused us with so many humourous stories throughout the entire evening. They were naturals on stage and complemented each other exceptionally well. Both of them are brilliant storytellers and had a very easy going camaraderie with each other and the audience. 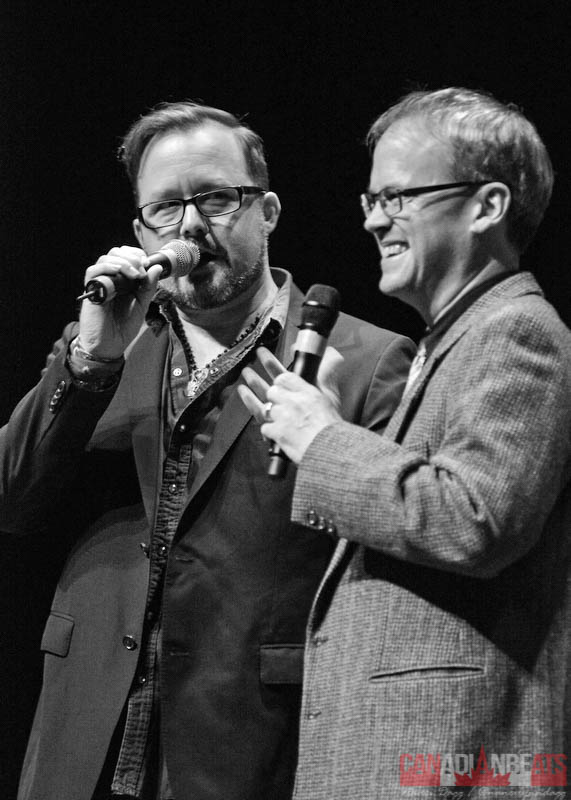 Lisa Brokop has an amazing and so recognizable voice and we were able to witness it firsthand as she performed a solo. Madeline Merlo came on stage and sang Brokop’s hit single “I’d Like to See You Try” with her. They had a lot of fun together and their harmonies were fabulous. 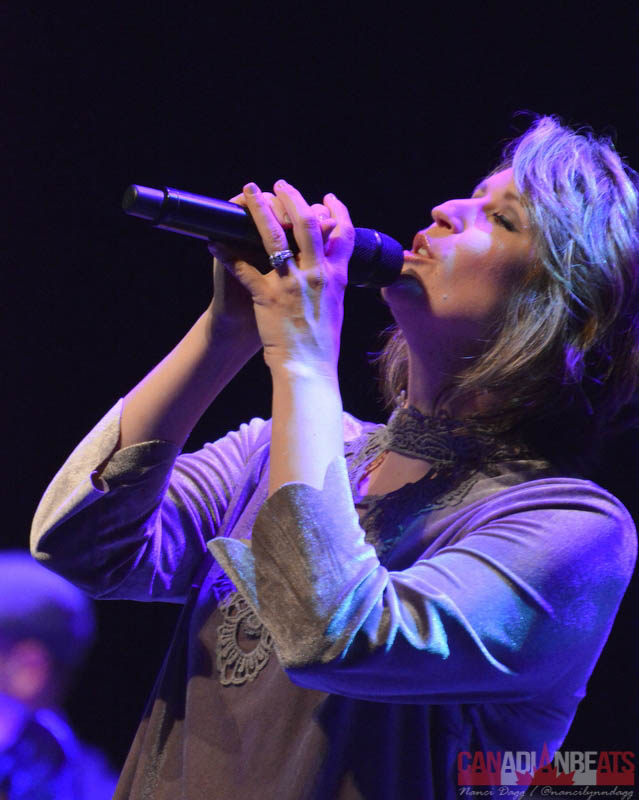 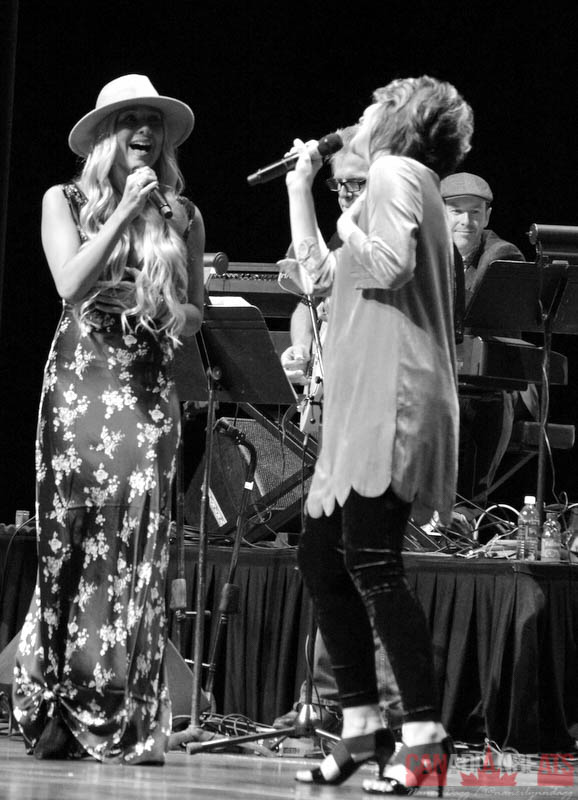 After Brokop left the stage, Merlo got her acoustic guitar to perform her own hit, “Whatcha Gonna Do About It.” She was so comfortable on stage and did an excellent job. 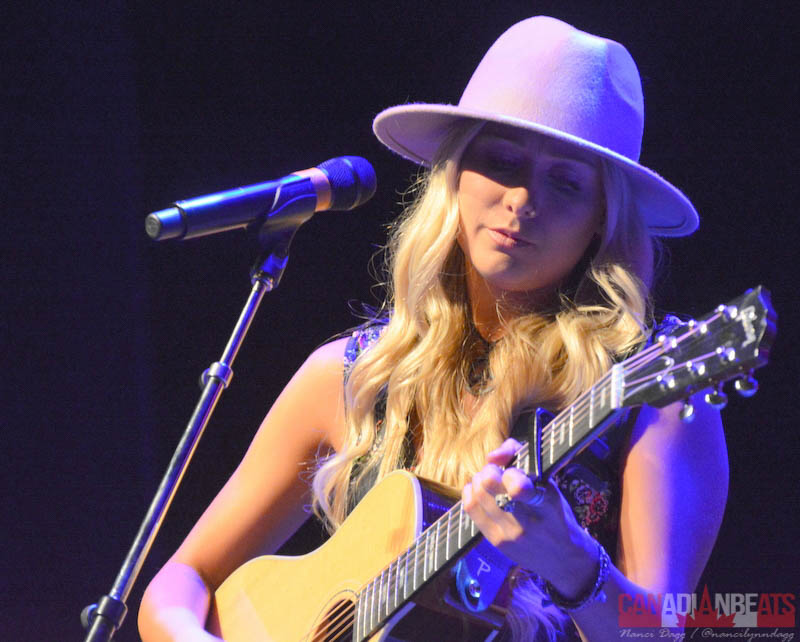 Deric Ruttan and Jimmy Rankin came together to perform a duet, “Sister Golden Hair” by Poverty Plainsmen. They did justice to this 1970s classic. 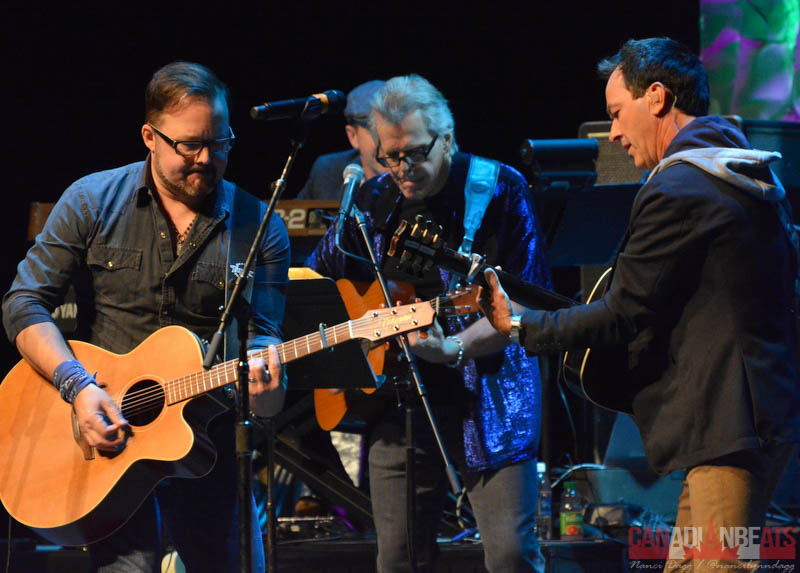 It was like a revolving door on stage by this time. Ruttan left and Rankin brought on Patricia Conroy to perform “Here in my Heart,” a song they wrote together. This song has that truth that is country music. 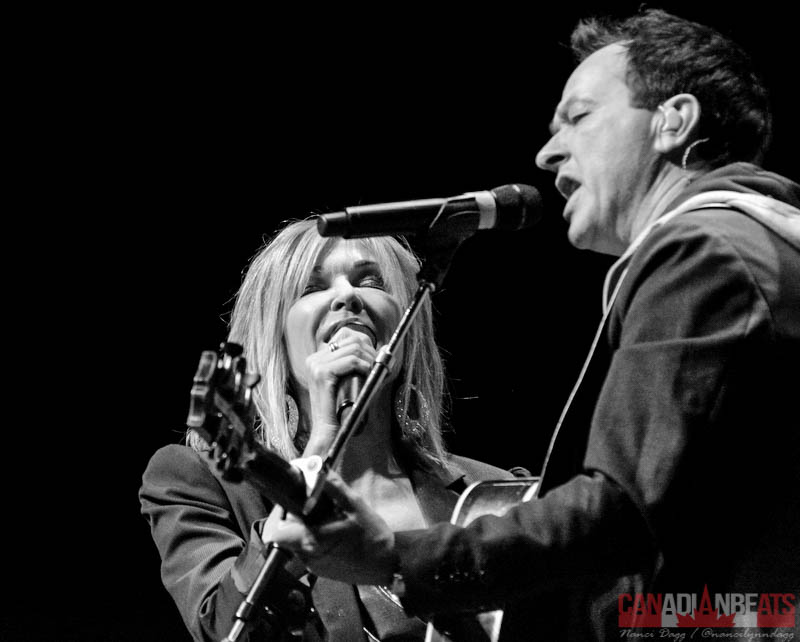 Next, the winner of the 2017 CCMA Spotlight Performance Contest was introduced. Representing the East Coast, Mallory Johnson performed a cover by Hank Snow, an East Coast legend, “Fool Such as I.” There is a reason why she won; she voice is pure and her pitch is flawless. She also felt right at home on the stage. 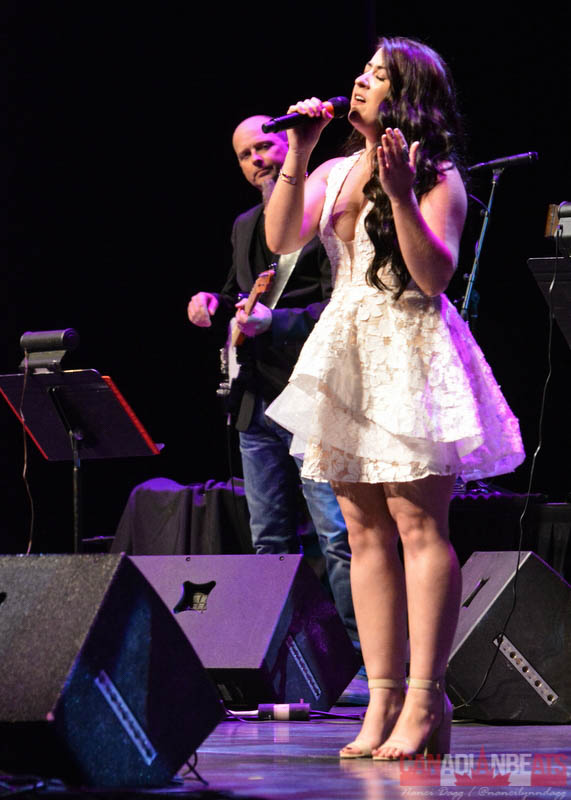 Deric Ruttan has an amazing sense of humour. He introduced 2016 CCMA Rising Star and Roots Artist of the Year, The Washboard Union this way – “Chris and David went into a deer camp and came out ten years later to start a band and Aaron is a GQ model. As they always do, these guys got the fully-seated venue to embrace the moment while clapping along to their hit single,” Shot of Glory.” 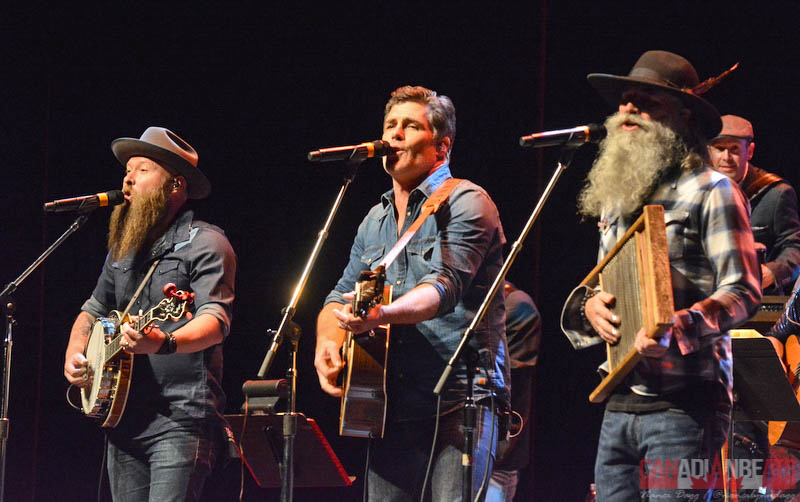 After a brief interview, bandleader (and multi-award winning artist) Wendell Ferguson engaged with both the band and crowd as they performed the Guess Who’s “Running Back to Saskatoon.” Each member of the All-star Band did a solo as they were introduced by Ferguson and this was done with no rehearsal at all. The talent assembled on the stage was phenomenal. 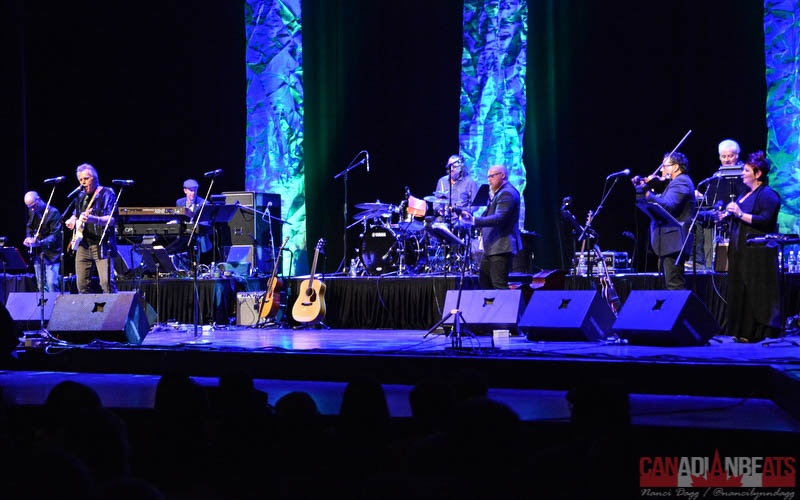 Patricia Conroy was next to come out. After a brief chat with Cal Gratton and Deric Ruttan, she performed her number one hit, “What Else Can I Do.” This truly amazing artist has a voice that just doesn’t quit. 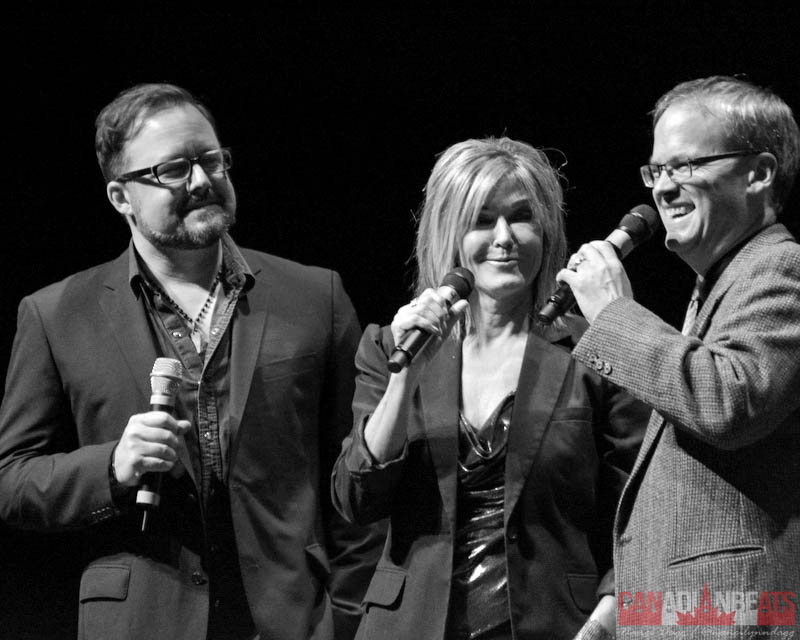 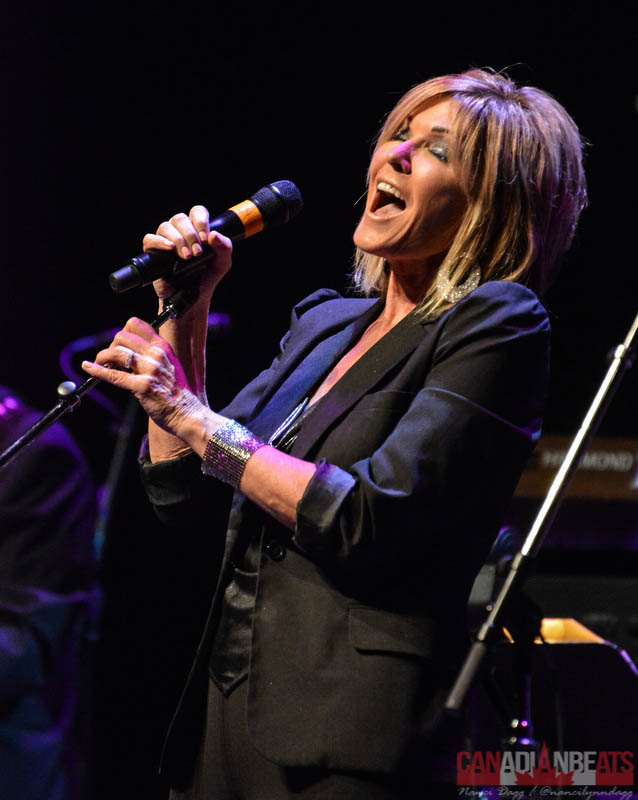 The Washboard Union stepped back out to take part in a “win, win, win” rendition of Jess Moskaluke’s “Cheap Wine and Cigarettes” with Patricia Conroy. The four of them made a connection with this tune like they had performed it together for years. 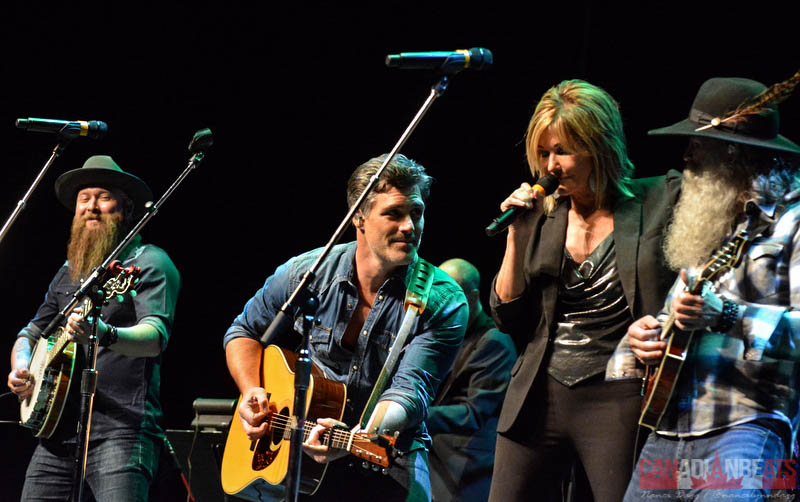 Deric Ruttan spoke about what it’s like to sing a song that he’s written for other artists and then went into “Any Old Bar Stool,” the hit he wrote for Jason Aldean. It was a treat to hear Ruttan sing this one. 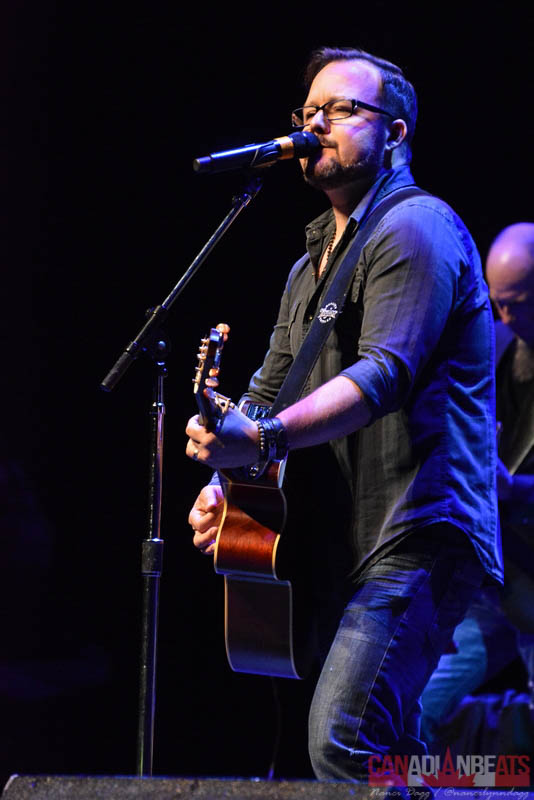 It was now time to show why a legend show is so special – Ian Tyson. Prior to introducing him, Deric Ruttan shared his Ian Tyson’s story with Cal Gratton. Ruttan has always felt that Tyson’s “Four Strong Winds” should be Canada’s national anthem. This is a huge song for him. When he moved to Nashville, he would often sing this song to his wife because it made him feel connected to his homeland. 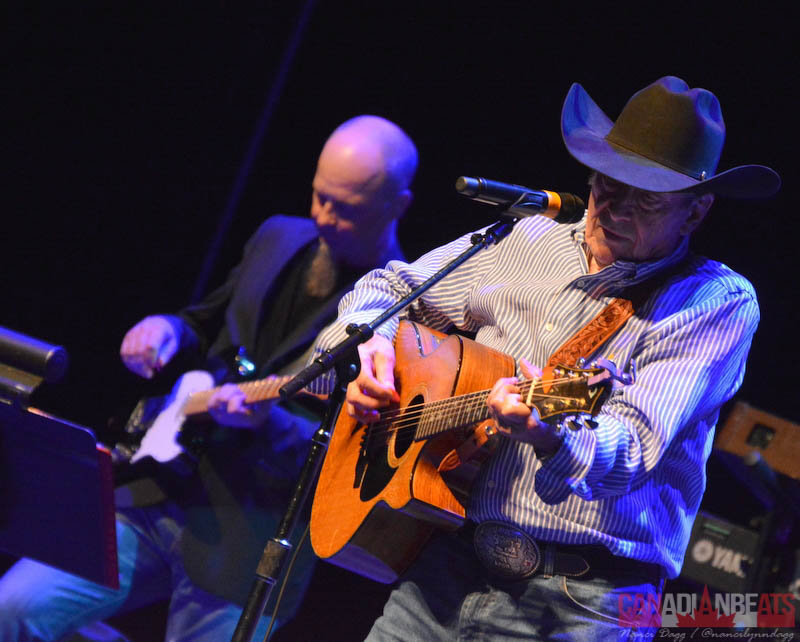 Ian Tyson received a very long stand ovation as he walked onto the stage. The first song he performed was “You Should Have Known,” his newest single that will be released on September 15. If you’re a cowboy, you’ll truly understand what this song is about. He received another standing ovation after he finished this one. 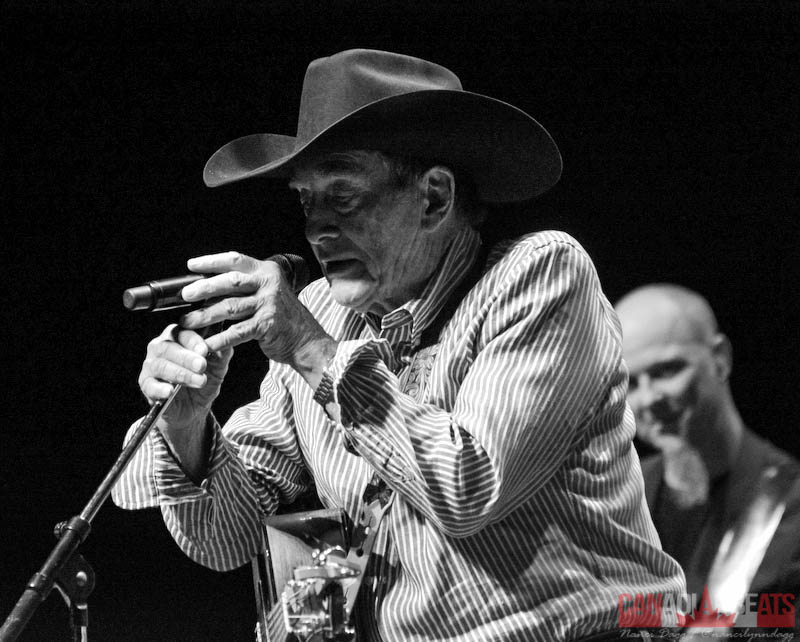 The impeccable Carolyn Dawn Johnson joined Ian Tyson for “Someday Soon.” They made it a simply beautiful creation. CDJ had to keep herself from crying; she was so touched to be up there with the iconic Ian Tyson. 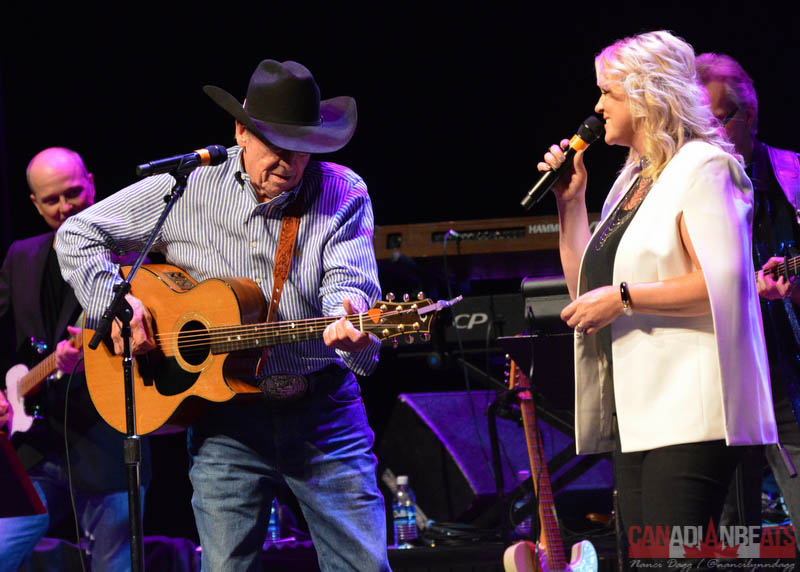 It was now Carolyn Dawn Johnson’s turn to shine as she sang her 1994 hit “Don’t Let Me Die.” This 16-time CCMA award winner is a consummate professional. She started off acapella with the band joining in after the chorus and Deric Ruttan after that for the harmonies. It was another magical moment. 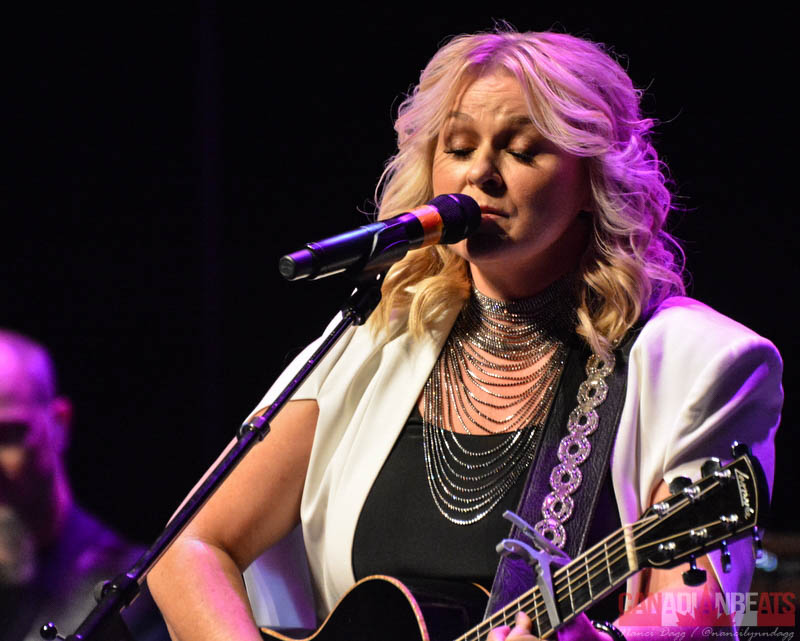 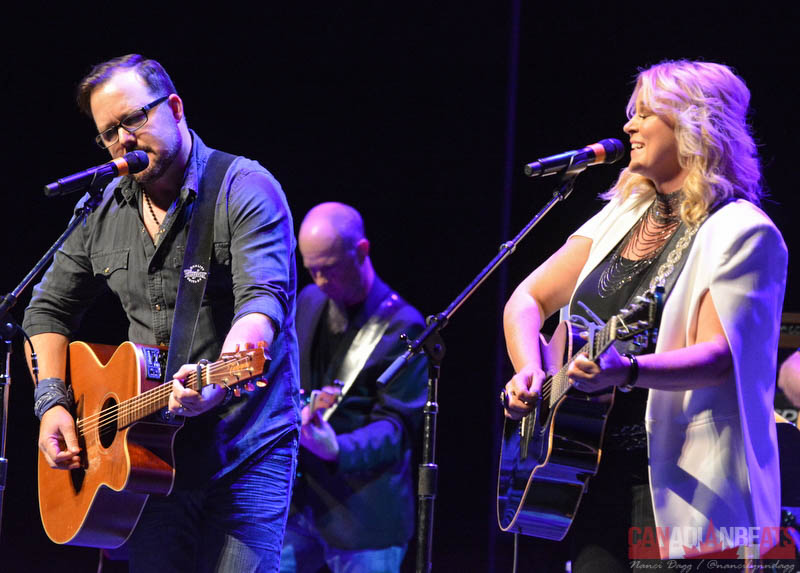 What followed next was a really fun collaboration. It was a girl power moment. It was icons and future icons together on one stage. Patricia Conroy, Madeline Merlo, Carolyn Dawn Johnson, Mallory Johnson and Lisa Brokop came together to pay tribute to Joni Mitchell and “Big Yellow Taxi.” Each artist stepped forward to sing a few lines from the song. They even had a dance routine happening. It was a monumental moment to witness. 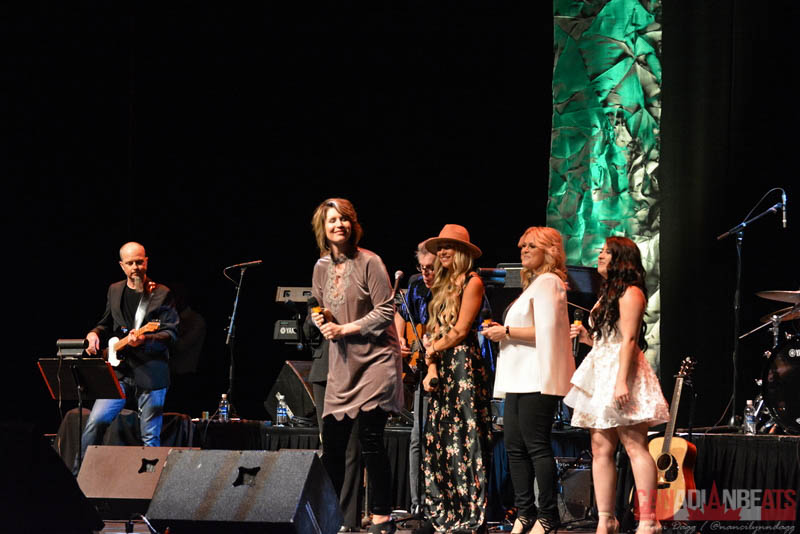 The final performance on the evening was set-aside for the 2017 CCMA Hall of Fame Inductee, Paul Brandt. He is the most-played artist on of Canadian country radio. Brandt took a few moments when he came out to speak about the deaths of Troy Gentry and Don Williams who passed away that day. We all took a minute to remember them and he then spoke of what these two men meant to him personally. It was a beautiful speech. He said, “Music has an amazing power to unite people. It transcends.” 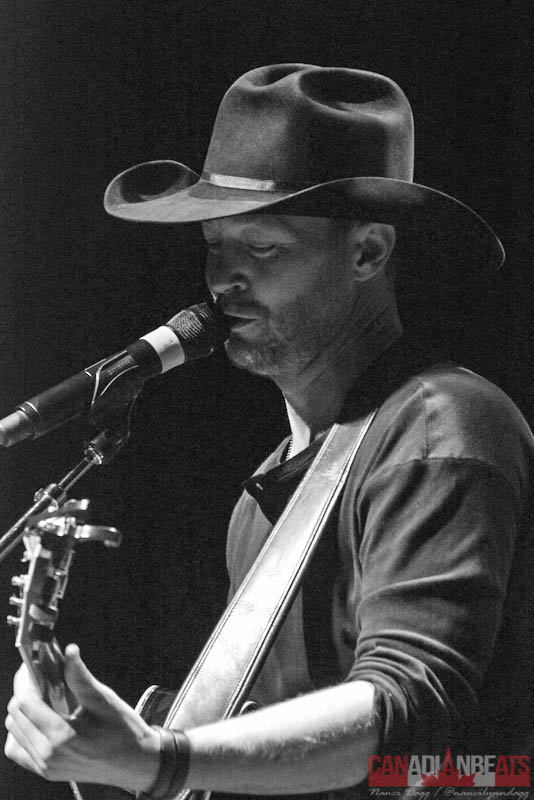 Now the music began. He started off with “My Heart has a History” followed by “Small Town and Big Dreams.” He acknowledged Saskatoon as the place to have a shindig, a hootenanny as he went into “I Do” and a fan favourite, “Convoy.” Carolyn Dawn Johnson joined Brandt for the female part of “Open Road” and his wife Liz joined him for “Alberta Bound.” They finished off with a kiss. They also received a standing ovation. 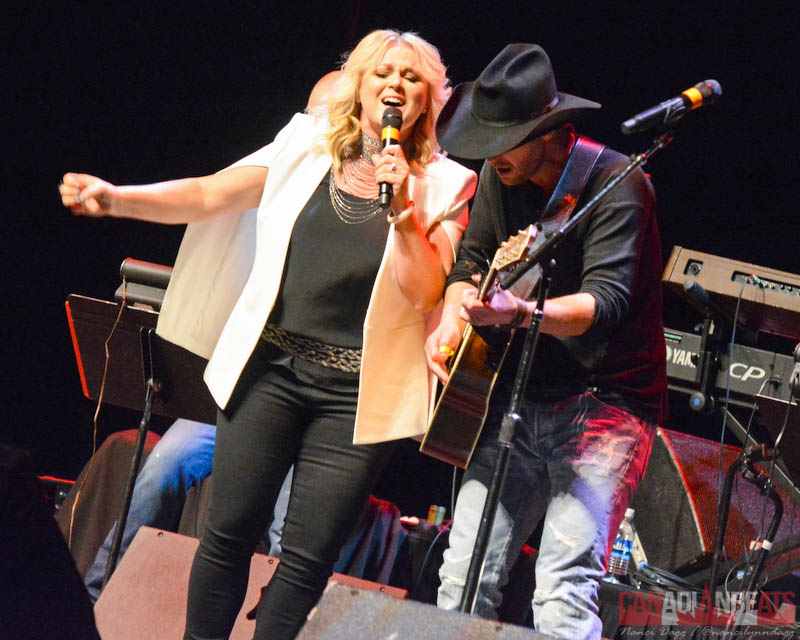 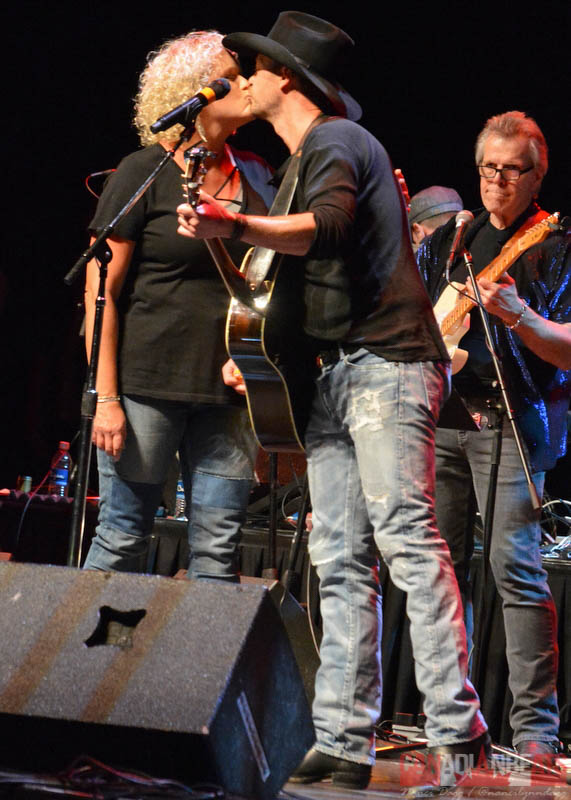 This was a night that, if you were there, you were able to catch full-fledged Canadian country music stars and icons doing what they do best – support their friends and country music family, bring out the best in each other, engage the audience, all while having the best time on stage. This is the magic of country music and this was an incredible night.

For more photos from our time in Saskatoon at PotashCorp Country Music Week and CCMA Awards, check out our Facebook page!