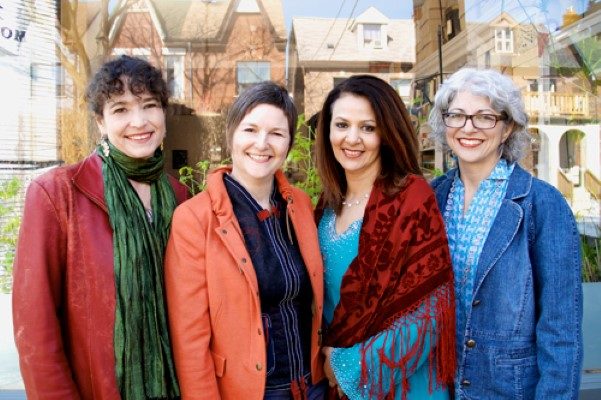 We had a chance to chat with Sophia Grigoriadis and Jayne Brown from Turkwaz for our newest segment of Five Questions With. The band was part of the Polyphonic Ground Presents series, although their show was Thursday night, the next Polyphonic Ground Series show will be on October 12 at Revival Bar and will bring Batuki Music and Uma Nota Culture together in a co-presentation of The Future Primitive (Toronto), Matatu Express (Ontario) and Beny Esguerra & New Tradition (Toronto by way of Colombia) for a mix of tropical soul music, traditional Latin beats, hip-hop, spoken word, and afrobeat.

Although you can’t catch them at the next Polyphonic Ground Presents show, you can catch them at various upcoming shows listed in the interview!

Jayne Brown: The short answer is that Turkwaz is four friends who came together to perform at a one-night benefit concert for Turtle House (an arts centre for Toronto newcomers) and never stopped playing together.

The long answer is that we are actually longstanding friends and musical collaborators. Our mutual interests have brought us together various times in various configurations over the years, including Maza Meze (a Greek/Arabic band) and Staro Selo (a Macedonian traditional ensemble). But we had never played all together. That changed the night of that benefit. We enjoyed ourselves, the audience seemed to enjoy what we played, and we were approached to play a concert by a music programmer who attended the show. That meant we had to come up with a name for our quartet. And voila… Turkwaz.

Sophia Grigoriadis: We all specialize in traditional music from different genres: Maryem in Arabic music, Jayne and Sophia in Greek folkloric music, and Brenna in Turkish music. And we share songs with each other that we have come across in our individual musical travels.

Our repertoire comes from a variety of sources. Some songs were taught to us by teachers both in Canada and in abroad; others are discovered through recordings.  In certain cases we may stay true to the sound of the original recording or performance style, and in others, we like to play with the arrangement; through the addition of vocal harmonies, or perhaps with an instrumental accompaniment that may be a bit different from the way a song is usually played

Of course, as we all lived at least part of our lives in Toronto, our musical influences are vast. So these other influences naturally sneak into our arrangements of tunes, which gives them new shape. We don’t have an expected outcome as we begin to work on a tune. Rather, songs seem to find their own lives as we are learning them.

Sophia Grigoriadis: We are excited to participate in the Inaugural Polyphonic Sounds concert at Revival on September 14th, 9 pm.

On October 29th Turkwaz and the Zephyr trio (performing tunes from Turkey, Greece, Bulgaria and Macedonia) will be hosting an evening of dance and music at Lula Lounge at 7:00 pm

On December 2 at the Aga Khan Museum, we will reunite with our 4 wonderful guest musicians who contributed so beautifully to our debut CD.

Our shows offer a variety of singing styles and rhythms. So you’re bound to be introduced to something new. Our performance has been described as a blend of old-world music with a fresh take.

Jayne Brown: Hmm. That’s a toughie, as all the songs are dear to our hearts — and so different from each other. The Nest Among the Roses (Apano Stin Triandafilia) is an example where the outcome is a bit of a departure from the original folk song.

Sophia Grigoriadis: Aw! That’s a trick question!  It’s way too difficult to answer!  There are so many amazing Canadian musicians and artists that we love. And all four of us have long lists. We did, however, just come from playing a series of folk festivals in Ontario and Calgary. So a few artists from across the country (some of whom we had the honour of collaborating with) are feeling particularly close to our hearts these days: Basia Bulat, The Good Lovelies, Barney and Dustin Bentall, Mélisande [électrotrad], Matt Epp, Coco Love Alcorn, Cris Derksen and Sandy Scofield to name just a few.