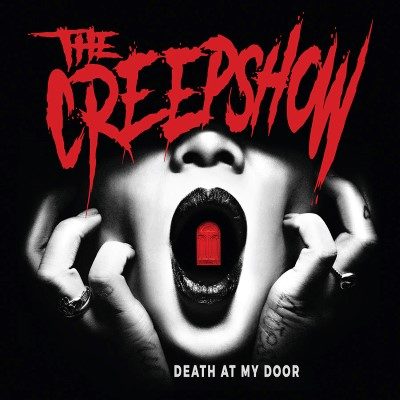 Canada’s premier punk rock outfit The Creepshow have broken their four years of recorded silence since the release of 2013’s Life After Death with their latest full-length album, Death At My Door.  Death At My Door is not only the fifth album from The Creepshow, but it also marks the band’s anniversary of just over ten years, an impressive feat for any modern rock band, but after listening to Death At My Door, it is quite apparent as to why.

Opening with the rip roaring chaos of the title track, “Death At My Door”.  While most modern punk bands incorporate a polished and pop inspired production, it is quite apparent that Death At My Door– while excellently produced- and The Creepshow have taken measures to avoid such.  Rather, they embrace the gritty and grungy punk rock of the 1990’s in tone with Rancid and Social Distortion.  Each song radiates a raw and aggressive energy that gives the record a live and exciting feeling.  Furthermore, the bands unconventional use of upright bass and organ further separate them from their peers, giving their punk a rockabilly flair that is especially noticeable in tracks of the likes of “Tomorrow May Never Come”, the barnyard stomp of “New Kings”  and the desolate shuffles of “Sticks & Stones” and “Another Way Out”.

Death At My Door is the second album with vocalist Kenda “Twisted” Legaspi who I cannot praise enough for her incredible vocal work across the record.  Her voice is powerful and carries a certain charm with it, however, her standout performance is her emotional delivery on the closing acoustic ballad, “My Soul To Keep”.  Her voice is raspy, heartfelt, and emancipating; she could be the girl singing in a local coffee shop or fronting a Led Zeppelin cover band, giving The Creepshow an extremely versatile pallet of vocal tones and textures.  Ultimately, it is this that gives the record a soul and a much rawer, at times vulnerable, and real feel.

Death At My Door is by far one of the best punk records to come out in the last decade.  The Creepshow seamlessly is able to harness a chaotic energy that is reminiscent of 70’s and 90’s punk while also creating a truly unique and fun vibe through the band’s love for country, rockabilly, and Americana music.  Not only does this give The Creepshow an incredibly distinctive sound, but it allows for the mobility to venture into song writing territory that neither of these often opposing genres have traversed.  Death At My Door is a near flawless and original take on punk rock, making for a must listen for long-time fans and new listeners alike.