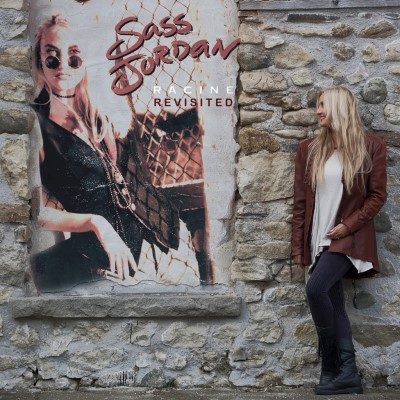 Sass Jordan is undeniably one of the biggest voices in Canadian music. Rightfully dubbed by many as Canada’s “Queen of Rock,” Jordan has consistently wowed fans album after album and is a brilliant live performer. Jordan is widely recognized across Canada and internationally for her iconic sound, voice, and personality. Jordan released her sophomore album Racine in March 1992, and a mega-milestone was achieved.

Racine not only put Jordan on the map as an artist, but also gifted us with 11 songs that are nothing short of rock classics. From “Make You a Believer” to “Time Flies” there were some amazing tunes captured on Racine in 1992. That album has done more than stand the test of time, it still brings in new fans every day as someone stumbles across one of Jordan’s hits on a playlist or local radio station.

It is hard to believe that timeless music can age, but it has been 25 years since the release of Racine. To celebrate the momentum created by Racine, Jordan hit the studio earlier this year to create Racine Revisited. While some artists just release special editions and great hits packages to re-market some of their hits, Jordan re-recorded the entire album from start to finish. With her vocals in absolute top shape and some of the best musicians in the industry backing her in the studio, Jordan recorded each track in the OCL Studios in Calgary, AB.

Racine Revisited sounds fresh, amped, and stays true to the classic sounds that we loved when Racine was released back in ’92. Jordan sounds just as powerful now as she did then. With years of live performances, Jordan has maintained her vocal abilities and going into the studio to lay new vocal tracks for Racine Revisited there is no doubt that she can still out sing many of her peers. Produced by Derek Sharp, Racine Revisited uses Sharp’s musical skills to maintain that original quality that Racine had with a breath of musical freshness.

With each song either written or co-written by Jordan, they just go to prove how much of a musical force Jordan is. As you listen to each track you are brought back to a time when the music rocked and you were discovering these new sounds for the first time. From the first few chords of “Make You a Believer” you know you’re ready to rock and go back in time. The opening track was always one of my personal favorites and one of Jordan’s most recognized. “If You’re Gonna Love Me” and “Who Do You Think You Are” keep that high rock tempo up and remind us why Jordan is nothing but the best. One of my all-time favorite songs is “You Don’t Have to Remind Me.” There is something absolutely moving in Jordan’s lyrics and vocals that bring chills to my skin and make me hit repeat.

Racine Revisited brings back musical memories. I love that Jordan went back into the studio to re-recorded these iconic tracks. Jordan’s talent is unmistakable, and as you “revisit” Racine, you are reminded of why she is Canada’s “Queen of Rock.” Embarking on the Racine Revisited Tour, Jordan will be playing multiple Canadian and international dates throughout the remainder of 2017 and well into 2018. You can grab a copy of Racine Revisited, get yourself a pair of tickets to one of her upcoming shows, or find out what Jordan is up to and connect with her below.

Racine Revisited Track List:
“Make You a Believer”
“If You’re Gonna Love Me”
“You Don’t Have to Remind Me”
“Who Do You Think You Are”
“Windin’ Me Up”
“I Want to Believe”
“Goin’ Back Again”
“Do What Ya Want”
“Cry Baby”
“Where There’s a Will”
“Time Flies”