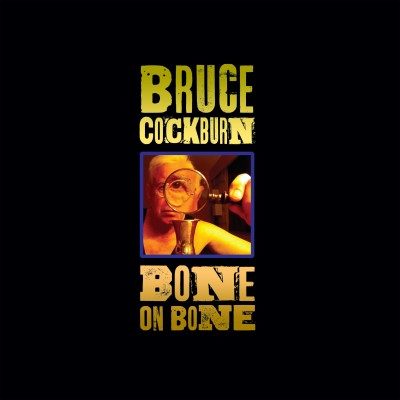 Canada’s iconic singer-songwriter Bruce Cockburn has returned with Bone On Bone, his first album in seven years!  Bone On Bone acts as the follow up to Cockburn’s 2011 release, Small Source Of Comfort, topping off his discography at an incredible twenty-five albums and showing that even at the age of seventy-two, Cockburn has no intentions of slowing down.

Bone On Bone opens with moody, dark, and atmospheric finger picking of “States I’m In”, a track where the cold echo of the thick steel strings of the acoustic guitar are perfectly complimented by the raspy and gruff voice of Cockburn.  His voice embodies so much character; like a sage, there is a sense of wisdom in there, often at odds with his frustrations and protesting nature.  Ultimately, this gives his lyrical narratives a sense of conviction, making them that much more authentic.  Like much of the record, “States I’m In” rests firmly in the musical territory where the blues and folk cross.

While Cockburn has built a career that is approaching the fifty year mark around his fusion of the blues with the acoustic singer-songwriter style that was made popular by people like Bob Dylan and Joni Mitchell, Bone On Bone is at its strongest when Cockburn takes a turn for the unexpected by introducing an alternative influence in his song writing.  “Café Society”, for examples” captures a rawer and more classic blues feel with the inclusion of drums and a horn solo; whereas, the title track, “Bone On Bone”, is an acoustic instrumental track which dabbles in jazz and is nothing short of beautiful.  I would go as far to say that it is my favourite on the record.  Another standout is the album’s closing track, “Jesus Train” which features a highly inventive guitar riff and a bluesy meets gospel groove.

Overall, Bone On Bone is a great record from Bruce Cockburn and will leave fans joyous to find that their seven-year drought has ended.  The album is charming and full of character and soul while remaining musically innovative among today’s often cookie cutter approach take in the singer-songwriter genre.  Bone On Bone is not only a more than welcome addition to Cockburn’s expansive discography, but it can also stand among some of his strongest records.