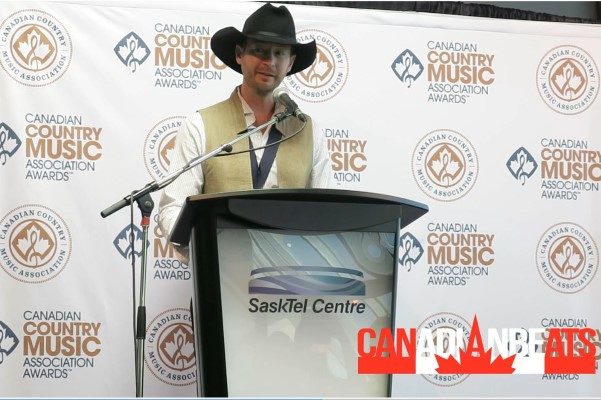 Sunday night, September 10, 2017, while the SaskTel Centre was full of Country Music fans attending the 41st Annual Canadian Country Music Association Awards inside the arena, a select group of media people were busily working behind the scenes. Canadian Beats was once again granted the accreditation to be there. While our Nanci Dagg was capturing many great photos of the night’s winners, I was up by the podium for the Q&A sessions.

Here are most of the winner that made their way in to see us.

13 years ago, Jason McCoy put together a trio, with Clayton Bellamy and Chris Byrne, called The Road Hammers, for a side-project to create an album of trucker music with some classic tunes and new songs. Magic was born and one album turned into five and a string of hits. They have toured all over and have become a name to be reckoned with in Canadian Country Music. It was heart-warming to see their reaction to winning Group or Duo of the Year. Here’s to the next 13 years, boys!

Paul Brandt is a Canadian Country Music icon and this year’s most recent inductee to the Canadian Country Music Hall of Fame. Brant received his award at the Saturday night Gala Dinner and Awards and gave us a moving speech that brought tears to many in attendance as well as himself. The man who presented him with that award was well-known Canadian sportscaster, Ron MacLean. Here is MacLean in the Media Room with a few words to say before Brandt takes to the podium.

Meghan Patrick has had quite the year! She exploded onto the Canadian Country Music scene with “Bow Chicka Wow Wow” and hasn’t looked back! Her debut album has released hit after hit. All this recognition has earned her Female Artist of the Year and SiriusXM Rising Star. Even her album, Grace & Grit, won Record Producers of the Year (Chris Baseford, Vince Gill, Jeff Johnson, Chad Kroeger, Carly McKillip and Justin Niebank). With a production team like that behind you, it’s no wonder her album has been the success it is! We wish Meghan all the best and look forward to seeing where the next year takes her!

The Washboard Union are a fun band to watch! They put on one heck of a show and seem to have as much fun on stage and their fans do in the crowd. This trio took Roots Group of the Year and gave a memorable performance during the broadcast show.

Dallas Smith‘s Side Effects was not only the Top Selling Canadian Album of the Year, it also took Album of the Year. One of its biggest releases, “Autograph”, took Single of the Year. Pretty impressive for this rocker turned country. He still is blown away by his success and gives thanks to his fans for their support.

We hope you enjoyed seeing a glimpse behind the scenes.