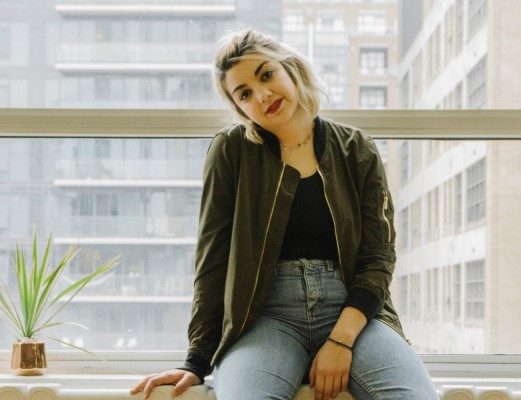 Toronto based artist, Sharon Nutzati, aka Caren took some time out of her busy schedule to chat with me about an upcoming video release, as well as her forthcoming EP which is due out this fall. Now it’s your chance to get the inside scoop on this talented Canadian artist!

Hi! I’m Sharon but on stage I’m Caren. I write tear-jerker tunes and have that good old Canadian indie rock sound. I live in Chinatown in Toronto above a little restaurant and I love every bit of it.

You released a solo album under your proper name, Sharon Nutzati and toured around Canada, why did you decide to venture into this new project under the name of Caren?

Honestly, I was ready for a bit of a change, I had been playing under my given name for years and found most people couldn’t pronounce it, spell it, or remember it. Caren has been a huge joke nickname for me over the years and after much deliberation and a few gin and tonics, I decided to take the leap and make it my stage name. I think it’s nice too because I’ve matured and the music has evolved so much since the last record that Caren is almost like a re-introduction to the world.

How would you describe your sound to someone who has never heard your music?

It’s a mix between that indie rock sound you’re hearing a lot on the “indie” radio stations and the stuff you’d hear on a teen drama when the girl is, walking in the rain crying because she found out her crush has a boyfriend or something.

You have said you are influenced by Joni Mitchell, Stevie Nicks, Feist and Kathleen Edwards, what else do you tend to pull inspiration from?

I try to keep an open ear or eye on everything around me and pull inspiration from that. I try to be good and listen to my friends talk about their problems but then I just soak it in and write songs about it. I also obviously pull inspiration from my life experiences but I always have a little pen and notebook for when an idea comes around, I just write it down and then come back to it later. I once wrote “cheeseburger tears” on a napkin because I wanted to write a song about drunk-crying into a cheeseburger, and I did. It’s not very good but it’s very funny.

You are about to release a new video next month, what can you tell us about that?

Yes, I’m so excited! The shoot day was honestly the best day of my life, better than my bat mitzvah. The song “Teach Me” is about trying to be all the things your partner wants from you, but in the end, it doesn’t work out because you weren’t being true to yourself. The premise is our lead has basically woken up one morning and decided she’s going to move out of her apartment that she shares with her partner. The video was directed by the amazing Kat Webber, and acting/dancing in it is my friend from middle school Murphy MacDonald-Rea. Those two girls really brought the idea to life and Murphy really made a beautiful mess of the set. All three of us added in little details from our own emotional break-ups so it’s a bit of a personal video for me.

Your debut EP will be out later this fall, which song are you most excited for people to hear? Why?

“Concrete Eyes” is my number one favourite. I just think we took a lot of risks with that one and put so much time and effort into it, that song gives me chills every time I hear it. Come Back though is probably the most different from what people are expecting, it’s a bit more upbeat and features a fuller band sound.

You worked with producer, Devon Lougheed (Hey Ocean, Smashing Satellites) on your debut EP, what was that experience like?

Devon is a sweetheart and a half. We met through his now-wife, my friend Gina, with the intention of just doing one song for fun. That first session went so well and felt so perfect, I couldn’t resist doing the whole EP with him. I’m so proud of what we’ve made, Devon really brought out the best in the songs. It was great too because I could just say “no I think the drums should be more like boom boom bam” and he would just know exactly what I was talking about even though I make absolutely no sense.

Once you release your EP, what does the rest of 2017 look like for you?

I’m doing a small tour with Brooklyn Doran in late October, and then back to the studio to record some more. I will probably be doing some more Toronto shows and hopefully an Eastern Canada tour in the spring but nothing is set in stone yet.

Do you have any upcoming shows that you’d like to tell us about?

September 25th at Burdock I’m having an EP release show, but since it’s a little earlier than the actual release, I’m giving everyone who comes to the show a free download of the 5 songs in advance.

With summer coming quickly to an end, what is your favourite activity to take part in during the summer months?

I love camping more than anything. I’m that person who brings 3 bags of marshmallows and sits next to the fire ALL DAY roasting them in between dips in the lake and pretending to be snow white and trying to feed chipmunks.

Here at Canadian Beats, we’re all about the “hard” questions, so let’s say you could only choose FIVE other Canadian bands/ artists to make up a festival line-up, which five would you choose?

This is the toughest question because I’m a such a fan of Canadian music. I think if I wanted my own personal cry-fest, I would say, Kathleen Edwards, Feist, Bahamas, Rose Cousins, and Peter Katz.